“High tunnels” sprout in Sitka, thanks to USDA program 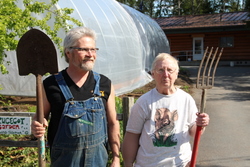 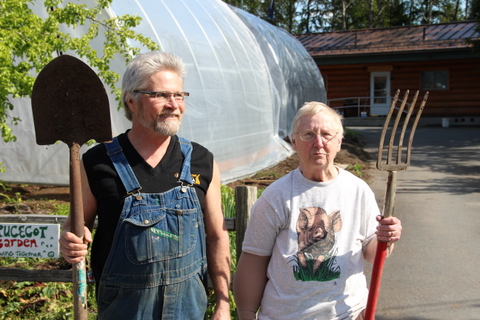 When you think of food in Southeast Alaska you might think of king salmon or moose — farming is not really our forte. But some Alaskans are trying to change that — at least on a small scale. Here in Sitka, you can find two large, transparent plastic tunnels rising from a front yard on Peterson Street. These are “high tunnels,” for growing produce. And they were funded by a USDA program that hopes to see similar stuctures sprout throughout the US.
Click here for iFriendly audio.

This month, Judy Johnstone plowed under the flower garden she’d cultivated for over 20 years. In its place, she erected a pair of unconventional structures, which look…

These are high tunnels, low-tech alternatives to the conventional greenhouse. Plastic sheeting is stretched across steel ribs to create a shelter for vegetables planted in the ground. The high tunnels allow gardeners to stretch the growing season. Johnstone hopes to keep hers going year-round.

MacLane — They’re very simple structures. But if you step inside, you’ll see the difference, between outside and inside.”
KCAW — Outside, it’s about 59 degrees, but inside, it’a s humid 75 or 80.
MacLane — Just a few more degrees is what you need to produce food. Out there is just a little too cold for what we’re used to eating. 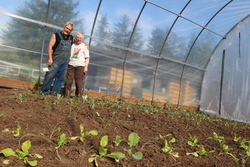 Inside the high tunnel, rows of vibrant green starts poke out of furrows in the earth.

MacLane counts off the crop.

“Here we have chard and broccoli…cilantro, onions, lettuce, things that can grow without protection, and some things that can’t, like here are all tomatoes.”

Johnstone’s high tunnels are part of a USDA program in which the agency reimburses gardeners for the cost of building the tunnels. In most of the country, the program is designed to conserve soil and cut down on the use of water and fertilizer. But in Southeast Alaska, the program’s major benefit is food. This is Samia Savell, who manages the program from the Natural Resources Conservation Service in Juneau.

“It’s pretty challenging to grow food in Alaska, and definitely in Southeast, where, as everyone just experienced in May, we can have pretty cool temperatures and a lot of rain, and that limits the number and types of crops that you can grow, and certainly we have a short growing season. But I think the appeal is extending that growing season and giving people more of an opportunity to grow a variety of crop that might not otherwise be possible in our climate.”

Johnstone and Maclane say the program is perfect for Sitka, with its chilly summers, the lack of farmland, and high food prices. High tunnels, they say, could be an excellent source of cheap, local produce.

Johnstone — We don’t want to add to the carbon footprint, by flying all this lettuce and stuff in from Mexico. It’s crazy. We can grow it here. And we should.
MacLane — And the price of food has gone up 40 percent in the last five years in Sitka, so it’s very expensive.

That’s according to the Alaska Food Cost Survey, which found that the cost of food for a family of four in Sitka increased by nearly 44 percent between 2006 and 2011. That’s compared to a 21 percent rise in Anchorage over the same five years.

The deadline to apply for the USDA funding is this Friday, June 15. MacLane says the program does require some past horticultural experience.

“You have to have some land, and a desire. And you have to have grown something. They really made it flexible for Alaska, so if you’ve grown a potted geranium, on your front porch, you will qualify. That’s farmer enough for Alaska. But you have to combine it with some thousand dollars’ worth of something that you’ve gotten from the land. So that could be sockeye, or deer.”

Johnstone is one of about 40 people in Southeast Alaska who have applied for the grant in the past three years. And she’s looking forward to a productive season.

KCAW — How much produce do you expect to grow this summer?
Johnstone — Lots…lots.