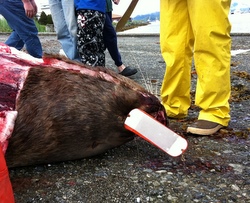 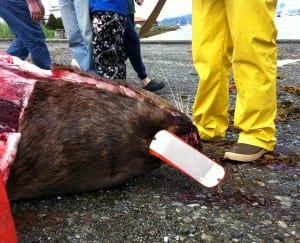 Responders stand on the UAS boat ramp in Sitka next to a dead male Steller's sea lion on Wednesday. The animal was found with a salmon flasher in its mouth, fishing line down its throat, and a hook in its esophagus. (KCAW photo/Ed Ronco)

A necropsy team spent most of Wednesday on the boat ramp near the University of Alaska Southeast in Sitka, working on the carcass of a male Steller’s sea lion.

The animal was found dead Tuesday near the Channel Club. Volunteers towed it to the ramp on Japonski Island. Juneau veterinarian Rachel Berngartt worked on the animal.

She says it had a flasher in its mouth and fishing line down its throat, with a hook through its esophagus.

Berngartt says the pneumonia appears to be the cause of death. Scientists still need to look at the numerous samples taken from the sea lion to be sure. The animal also hadn’t eaten in some time and had wounds on its back. Berngartt says there was speculation they might have been caused by a shotgun, but upon closer examination, they were likely caused by another sea lion.

“Male Stellar’s sea lions compete for girls by fighting. And when they fight, they bite,” she said. “So they appear to be bite wounds that were inflicted over the past couple days to several weeks. They did have evidence that they were trying to heal, so they weren’t brand new fresh wounds, but the majority of them weren’t super old wounds.”