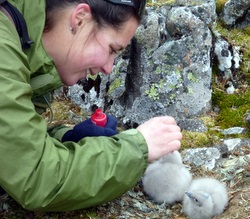 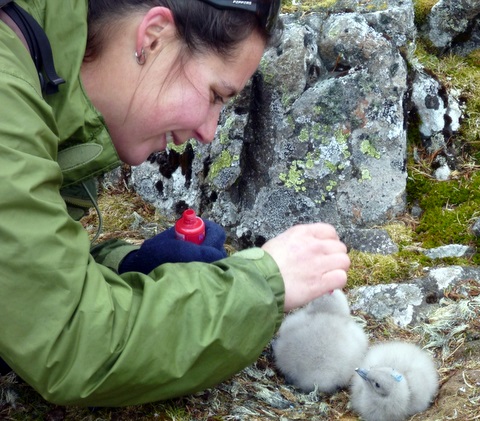 A two-year project is underway in Sitka Sound this summer to study the rhinoceros auklet. Unlike much of the biological research in the state, the work on this particular seabird is not about unraveling the mystery of its decline. The “rhino,” as scientists call it for short, is actually thriving, and a graduate student at the University of Alaska Fairbanks is going to spend most of her waking hours over the next two summers trying to learn why. 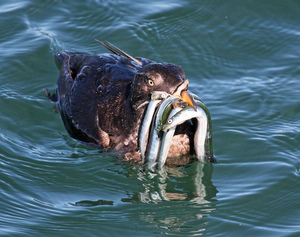 An adorable-but-efficient hunter: a rhinoceros auklet with a buffet of sand lance. (Flickr photo/Andrew Reding)

For Alexis Will, it’s pretty much about seabirds and little else. Since graduating from Sitka High School ten years ago, she’s been in the field – from Antarctica to the Bering Sea – assisting in bird research for a variety of different projects.

Now, in pursuit of her own graduate degree, she’s got her own project – to understand the foraging strategies of the rhinoceros auklet.

The study was suggested by mentors in the US Fish & Wildlife Service who, over the course of decades of work in the Alaska Maritime National Wildlife Refuge, had noticed a gap in their knowledge of seabird ecology: Why, when changes in the environment were putting so many species under pressure, were rhinos thriving?

Will says this is an atypical wildlife study.

“So instead of going at climate change, or even changes driven by human activity in a negative way, to see why this animal is declining, we can look at a successful species, learn why it is doing well, and then look around to see if other species might do well if they experience similar changes.”

Rhinoceros auklets range from Southern California to Japan, and eat fish — from tiny anchovies to larger rockfish – that inhabit the top ten meters of the ocean’s surface. There are about 2,000 nesting pairs on St. Lazaria Island in the mouth of Sitka Sound. They’re ungainly birds. They struggle to become – and remain – airborne. Their landings are barely-controlled disasters. They don’t seem like very fierce predators – in fact, Will admits that they’re adorable – but they clearly have some advantage, and Will would like to find it.

“Rhinoceros auklets are really neat. They have a long nestling period, when the chick is in the nest growing. It’s about fifty-four days, and a lot can happen in fifty-four days: new fish move into the area, other fish move out. In a season, they can cover a lot of different ocean conditions. And so by looking at how they adjust their foraging behavior over that time, I can get a handle on how hard they’re having to work to find food for themselves and their chick.” 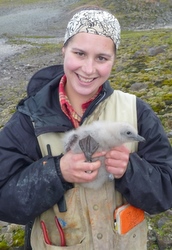 This may not seem like such an interesting problem, at first. But there’s something else about the rhino that makes its success unusual. Other seabirds bring food back to their young throughout the long summer day. Rhinos only return to their chick once in every twenty-four hours, and always at night.

“So they have a different set of factors to balance when they’re out there. They still need to feed for themselves, but they have all day (you know how long the sun is up now). So they really need to maximize that single trip they make for their chick’s food.”

Will plans to capture and tag adult rhinos. She’ll attach a gps tag about half the size of a pencil eraser to their tails – this device records the bird’s location – and place another tag on its leg that records water depth. She’ll replace the tags every three to five days.

Rhinos nest in burrows they’ve dug in the shallow soils of St. Lazaria and – you’ll recall – they return only once a night. That’s when Will finds them.

“I love to pretend that I’m some sort of Ninja of the Night, which really involves sitting still in salmonberry bushes on wet, muddy ground. I’m catching them as they come into their burrows. So I set my traps and lay in wait. I pretty much wait to hear them come in. They’re not very stealthy. Even though they’re using the cover of darkness they still sound like attack helicopters. They’re crashing into tree trunks, falling through the branches. It’s kind of like being in a little bit of a war zone out there.”

Other data Will plans to collect include sample feathers from the rhino chicks. They’ll be tested for stress hormones that Will can correlate to the food supply.

The rhinoceros auklet study is funded by the North Pacific Research Board and the US Fish & Wildlife Service. It’s actually part of an overarching research effort on groundfish. But the ocean ecosystem is a puzzle made up of pieces. And Will’s research will contribute to the picture.

“We’re a part of the ecosystem, too. So understanding what’s going on out there is definitely a piece of what I’ll be doing, and what they’re doing as well.”

Will plans to spend the next two summers on St. Lazaria, and the next two autumns crunching numbers on campus in Fairbanks. She hopes to complete her thesis and graduate with a Master’s Degree in 2014.