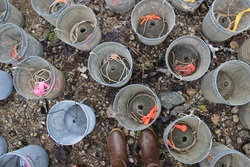 Over thirty years ago, the Sitkoh River watershed on Chichagof Island was logged, damaging the local salmon habitat. Now, the US Forest Service is partnering with environmental groups to restore the river — and they say the project is a perfect example of broader changes taking place on the Tongass.

About 35 air miles north of Sitka, along an old logging road in the Tongass National Forest, Forest Service staff and volunteers with the Sitka Conservation Society are setting fish traps in the Sitkoh River. They have just a couple hours to move hundreds of fish out of a 300-yard stretch of stream, and they’re taking bets on how many fish they’ll catch.

In this side channel of the Sitkoh River, the water is about 15 feet across, and it’s nearly up to my knees. But in just a few hours, there will be hardly any water here at all. That’s because contractors with the US Forest Service are creating a temporary dam upstream, which will redirect the water of the Sitkoh and allow this stream bed to dry up. And that’s why they’re trapping fish, mostly coho salmon fry, to move them downstream.

Once it’s dry, the contractors will begin work that they hope will restore this stretch of river to usable salmon habitat, repairing damage that was caused by logging over thirty years ago.

This area was logged in the 1970s and again in the 1990s. The forest service clearcut about 2800 acres — that’s about a quarter of the Sitkoh River watershed — and they built about 30 miles of road. A section of that road is now part of the problem. It was built so close to the river that the water jumped its banks and now runs down the road instead.

“This logging road is not prime Salmon habitat,” says Perry Edwards, ecosystems staff for the Forest Service’s Sitka Ranger District. (Edwards is also on our board at KCAW.) “It’s shallow, and in the summertime, if we have a low flow, it could actually dry out enough to where the fish can’t make it through, and they’re going to die. In the wintertime it’s so shallow that it’s going to freeze solid, again it’s going to kill these fish.”

The road isn’t the only problem. In the 70s, loggers cut right down to the stream’s edge — a practice that’s now illegal. That meant there were no big, old-growth trees to hold the banks in place. And it meant there were no big trees to fall across the river and create the deeper pools of slower water, which salmon need to rest on their journey upstream, hide from predators, or build their nests.

Now, the Forest Service is partnering with the Sitka Conservation Society, Trout Unlimited, and the Alaska Department of Fish & Game to restore the Sitkoh River, in part by building structures that will mimic the natural processes of an old growth forest.

“They’re bringing in 274 logs in here, plus another fifty trees with rootwads attached,” Becker says. “Large wood structures will go in on the banks and in the stream to create pool habitat for fish.”

Edwards says the Tongass would eventually repair itself, but this project will accelerate the regrowth.

This restoration represents a dovetailing of interests for the Forest Service and Sitka Conservation Society, who have not always seen eye to eye. Now, the two groups collaborate closely on some projects, and SCS is pushing the Forest Service to shift priorities on the Tongass, and manage the forest for salmon, not timber.

“It’s a culture shift for the forest service,” said Andrew Thoms,  Executive Director of the Sitka Conservation Society. “Little by little the agency is getting their head around the fact that one of the most important commodoties and products and environmental services that comes out of the Tongass National Forest, is salmon, and that investing in projects like this that restore salmon habitat, is economically and socially beneficial to all the communities that live in the region.”

The Forest Service may not be moving as fast as SCS would like, but it’s in the midst of its own transition.

“The forest service is trying to widen the economic base of Southeast Alaska, and timber is an important part of that,” said Wayne Owen, Forest Service Alaska director of Wildlife, Fisheries, Ecology and Watersheds.

Owen says that under the Obama administration, the agency has committed to restoration projects like this one, and is moving from a single-minded focus on old-growth harvest, to a larger agenda.

The Sitkoh River project fits neatly within that agenda. So in early June, the Forest Service flew a bunch of reporters in from Juneau to show off their work. The timing was lucky — the contractors cut off the water flow mid-day with a giant aqua dam, basically a long, water filled-bladder that stretches across the river.

The aquadam does its job well. Pretty soon, the water level downstream is dropping fast.

So it’s time to catch those fish, and move them downstream.

The final count was 653. And if the project goes well, a decade from now, there will be many more fish in this river.