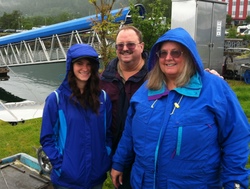 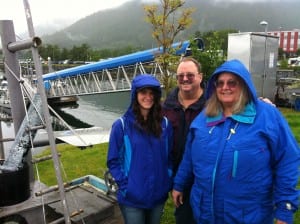 Karissa, John and Karen Amrhein pose at Thomsen Harbor on Friday. A newborn Karissa was found in a sink at the harbor around midnight on Jan. 24, 1994. The Amrheins adopted her three weeks later. She just graduated from high school in Florida. (KCAW photo/Ed Ronco)

On a winter night in 1994, a newborn baby was found lying in a sink at Sitka’s Thomsen Harbor. Eighteen years later, that girl is now a young woman named Karissa Amrhein. She graduated from high school this spring and last week, she returned to Sitka.

At Thomsen Harbor, Karissa is digging through her wallet. She pulls out a fishing license. She says all she wants to catch is something edible.

It’s the 18-year-old’s second time in Alaska. The last time she was here, she was an infant, and the subject of an incredible story that began just a few feet from where we’re standing.

“He opened up the harbor door, just doing a regular bathroom check, and apparently I made a little noise of some sort,” Karissa said. “He checked again, and there was a little baby sitting in the bathroom sink. That baby was me.”

According to that day’s Sitka Sentinel, Karissa was wrapped in a T-shirt, and had just been born. She was light – 4 pounds, 12 ounces, the newspaper reported – but healthy. Authorities never found her birth mother. 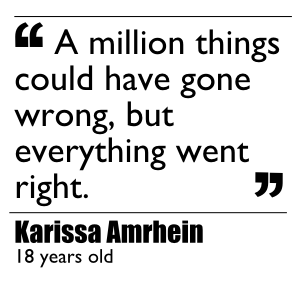 Karissa says she knew the basics growing up: That she was adopted, that she had been left by her birth parents, but not a lot about where and when until just recently.

In Sitka, she had a chance to meet some of the people who rescued her and visit the bathroom sink where she was found, as well as the hospital that treated her. She says the trip has been emotional, but she’s also pretty matter-of-fact about the whole thing.

“My past is my past, but my future is what I look forward to,” she said. “Knowing more about my past isn’t going to change who I am or who I’ve become. It’s just nice to know. I’ve always wondered.”

As for the future?

“I’m going to go to Flagler College down in St. Augustine,” she said. “I’m going to major in fine arts and move on to zoology. Both have always been an interest for me. One of the main subjects of my drawing is an animal of some sort. I grew up around animals. I lived really close to a creek so I was constantly in the woods, in the mud, doing something nature related. I just started putting that into art as well.”

Karissa’s parents, John and Karen, adopted her when she was three weeks old.

“And it was pretty quick,” John Amrhein said. “We didn’t have a whole lot of notice, so we had to do as best we could. We went shopping at Freddy’s in Juneau to get as much as we could, and what we couldn’t get our church members came up with. We were able to put together a nursery pretty fast and get it stocked with everything you need for a child. Normally you have nine months to find this stuff. We had three days.”

Karen Amrhein says they knew the baby they were adopting was the little girl found in Sitka.

Karissa’s parents say they’ve been amazed at how many people they’ve reconnected with, even during their first day in Sitka.

“We walked over to the fire station and the person behind the desk was Roberta White. She was on the run that night,” John Amrhein said. “She didn’t get to pick her up or hold her, but she was on the run, and she just took over. Started notifying people and pulling up names of people and getting phone numbers for us so we could call. It was just amazing.”

Karissa agrees. She says she never really asked a lot of questions growing up. Knowing the full story is surreal.

“It was the middle of winter. Anything could have happened,” Karissa said. “But the best outcome happened and I ended up being safe and getting adopted by great people. A million things could have gone wrong, but everything went right.”