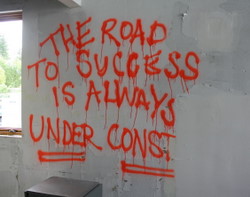 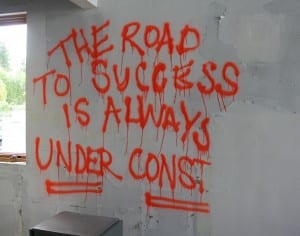 A phrase painted during the school year is seen partially covered with wall mud on Tuesday. Blatchley Middle School staff and students have been working in an under-construction building for the last year. The hope is that a major remodel of the building will be done before Christmas. (KCAW photo/Ed Ronco)

A major renovation of Blatchley Middle School is in full swing. The $12 million project will see a completely remodeled interior in the building. Workers also are changing the system’s climate control and other mechanical systems. Engineers hope doing so will mean savings in the long run.

As a work radio blares music on the floor, the library at Blatchley Middle School sounds decidedly un-library-like.

Some of them are putting mud on the walls to prepare them for new coverings. Others are hanging sheet rock. Down the hallway, Kelli Cropper is standing in the commons. She’s the city project manager in charge of the Blatchly remodel. Behind her, huge squares of color have been painted onto the wall.

“Mandarin, tequila lime, and summer plum,” she says. “Those are the names.” 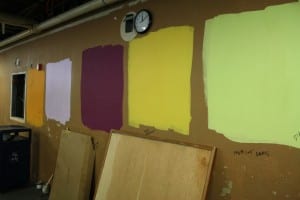 "Swatches" of color are painted on the wall in the commons at Blatchley Middle School. (KCAW photo/Ed Ronco)

Next to them, three more shades called fresh-cut grass, yellow raincoat and a light purple color named “grape ice.” These will be distributed throughout the building, to make the atmosphere brighter and more inviting.

“A lot of purples and oranges and bright colors will be in the school when we get done,” she said.

Before, the paint scheme in the building was largely creams and beiges.

As we walk around the building, there are still remnants of the last school year. In one classroom, a white board is covered in Tlingit words. A sign in one hallway says “Sixth Grade Only,” and advises other students to find a different route. And drawings of plant and animal cells are still on the wall. The cell membranes and cell walls are missing, so you can see representations of the nuclei and the mitochondria and the endoplasmic reticulum. The cells guts are on full display. Just like the building.

Because other than those things, you’d hardly recognize the place. The commons is a giant storage room for construction materials. A wire spool and a hard hat sit atop science text books, stacked up in the art room. It’s a mess now, but when it’s done, officials hope this building will be bright, airy, cleaner and more comfortable.

But the changes are far from cosmetic. Outside, huge heating and cooling systems are waiting to go into place. The building will have 46 heat pumps in its rooms and hallways, with an assortment of larger air-handling units tucked away in machine rooms.

They’ll be able to better regulate the building’s climate. For example, if one room is too cold and another is too hot, the new equipment will sense that and use the energy from one to even out the other.

The new system is expected to the district some money. Cropper says the utility bills, as they stand now, are pretty steep.

“Average is like $250,000 a year for this school alone,” she said. “Hopefully, we’re going to see significant savings there.”

But an analysis suggested the school could save $300,000 in energy costs over the next 20 years.

The savings are long-term on a $12 million project. But 70 percent of the funding for this comes from the state. Another 30 percent comes from the city. Voters approved a bond issue in 2010. 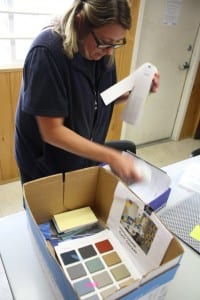 Back inside, Cropper says it’s been a fun project to work on. And teachers and students, who spent the last school year looking at wires and building guts up in the ceiling, will hopefully notice a big difference in the fall.

“We should have carpet. We should have the walls painted. Hopefully we’ll have all the casework in,” she said. “Most of the mechanical is already done. If everything goes as planned, we should be complete-complete before Christmas. But…”

But, she says, there are a number of X-factors, not the least of which is getting specific parts or pieces of equipment quickly when you live on an island in Southeast Alaska. Still, Cropper says it’s going well. Then, she smiles, and crosses her fingers.