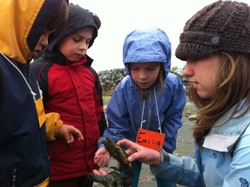 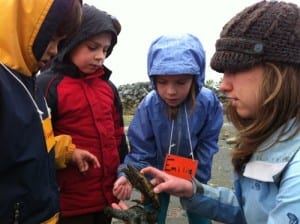 Ashley Bolwerk (right) shows off a critter to students at Critter Camp, put on by the Sitka Sound Science Center. (KCAW photo/Ed Ronco)

A series of camps are taking place this summer at the Sitka Sound Science Center. They cover water, marine life, the forest and even flight – all parts of daily life in Southeast Alaska.

The idea is to reinforce what the students have already learned in school and maybe even prepare them for the upcoming year. And to have fun, too.

When the tide goes out behind the Sitka Sound Science Center, it reveals the rocky tidal flat. It is a wide expanse of kelp, driftwood and stones, dotted by pools of seawater. It is an invitation to draw closer to the silvery ocean, under the safe blanket of low-hanging gray clouds. It is, quite possibly, one of the most serene places in Sitka.

Most of the time. Right now, some students are standing shin-deep in water, screaming.

“A hermit crab! It’s like, this big!” the shout. The instructors hurry over. “It’s huge! Look at that!”

This is critter camp, put on by the Sitka Sound Science Center. As the name might suggest, there are 17 children, all entering first or second grade next year, combing the tidepools for, well, critters.

A young girl walks up to instructor Ashley Bolwerk. She’s holding something in her hand.

“He’s called a blue mussel because that’s what color he kind of looks doesn’t he?” Bolwerk says. “Can you put him back where you found him?”

“Because where does he live?”

Several students shout: “In the water!”

“Right,” Bolwerk says, “where you found him, in the water.”

The students spend time as a group and then, under the careful eyes of camp staff and a few volunteers, they wander freely, looking for more critters. Alex Bailey is one of them. He’s higher up on the beach than the rest of the students.

But that hasn’t stopped him from finding plenty to look at.

“Well, I did find a shell that was alive,” he says. “And there was a little crab in it that never opened, but he was trying to keep his water inside his shell so he can be wet.”

Alex says he likes looking for critters on the beach. He’s not alone.

“I love tidepooling, and I feel right at home, because they’re like ‘Look at this!’ and I’m like ‘No way! What did you find?’ and I’m just really excited all the time,” says Bolwerk, the instructor.

Officially, she is logistics coordinator at the Sitka Sound Science Center, but the kids call her Miss Ashley.

Miss Ashley, and Miss Alaina — Alaina Avery, properly, the AmeriCorps volunteer at the center — both have backgrounds in biology and a lot of curiosity. Both Miss Ashley and Miss Alaina agree that some of the most fun they have comes when kids ask them a question and they don’t know the answer.

“And the kids love when they stump the instructor, or stump the teacher,” Avery says. “They’ll find something and I’ll go, ‘I don’t know what that is,’ and I’ll have to flip through my field guide and try to figure out what it is. There’s still new stuff.”

There were a few camps on the menu this summer. Critter camp joins programs about water, flight and the forest. They serve students as young as the ones we met up to those entering fifth grade. There’s an aquarium camp set for August, too. That is designed for students in grades six through eight.

The idea, says Avery, is to reinforce the things the students learn in their regular classrooms or in some cases to prepare them for the coming year.

“If it’s something that they’ve already covered in school, if it’s something in summer camp, they can say ‘Oh my gosh! I already know this. I already know what a mammal is,’ and they can be the kid who’s helping explain things,” she says. “Or hopefully next year, if they’re talking about photosynthesis, it’s not just a big scary word. It’s something they’ve seen before in camp, they’ve kind of experienced it. It’s not as intimidating, and they can go in and learn more.”

There’s also the hope that what’s happening now, at a very young age, could plant the seeds for a lifelong interest in science. After all, it worked for these two biology majors. For Bolwerk it was a fourth grade teacher.

“Her name was Miss Dieball,” Bolwerk said. “She was just wonderful; had a ton of energy and she was actually my science teacher for fourth, fifth and sixth grade. Lots and lots of fun every year. It was great.”

“As a little, little child my science camp was Long Island Sound with my grandfather, so he takes credit for that, and I’ll give it to him,” Avery said. “But in junior high and high school, Dr. Carroll was my chemistry professor, and she had us to projects like make a three-dimensional periodic table. It helped a lot. That building really helped get the concepts across.”

So someday, is some kid going to be sitting in a science center somewhere, talking to a radio reporter saying ‘Miss Alaina and Miss Ashley helped me find the chiton on the beach?’

“I sure hope so,” Bolwerk said. “That would be amazing.”