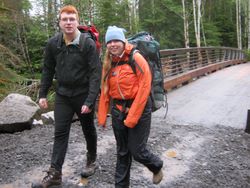 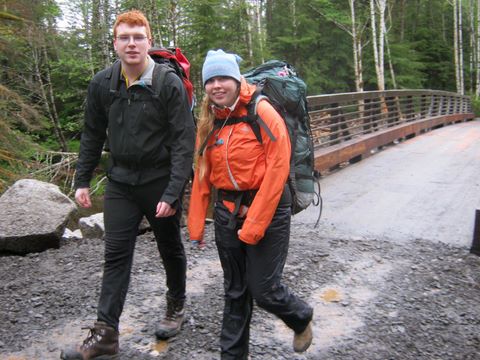 A pair of hikers try out the new 80-foot steel bridge on the Mud Bay trail. (KCAW photo/Robert Woolsey)

The Sitka Ranger District is wrapping up a major road project begun two years ago with federal stimulus funding. A much-anticipated cabin replacement is just getting underway. Click here for iFriendly audio.

Annemarie LaPalme manages cabins and trails for the district. Users who haven’t been on the Mud Bay Road in the last couple of years will find things dramatically changed: the deep, muddy ruts are gone, as are the large cobbles that could bring a mountain bike to a dead stop or jolt an atv onto two wheels. It’s now a packed gravel surface, crowned for drainage – but not for speed. The roughly seven-mile route across Kruzof Island is crossed by over twenty water bars: two-foot deep ditches designed to keep water off the road surface.

LaPalme says the water bars are not there for traffic control.

“You know, we’ve gotten various comments about those. People have been used to going faster on motorized vehicles on the trail. They can’t go as fast as they did prior to their being put in. And we’ve gotten people commenting that they’re really fun to drive through, and bicycles. People have different opinions about them, but the primary purpose is to get the water off the road so that we can retain the surface.” 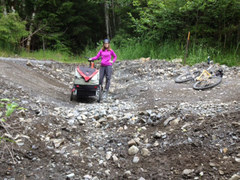 Rocky Bottom: Sitkan Lynne Brandon poses in one of the over twenty waterbars dug across the Mud Bay trail. Brandon says some of the waterbars are fun, others are "gnarly," and damaged her bike trailer. (Russell Brandon photo)

The Forest Service has spent $600,000 on the project – with funding from 2009’s American Recovery and Reinvestment Act, the so-called “federal stimulus” bill that polarized Washington politics but kept companies like Sitka’s TM Construction rolling. Owner Todd Miller had six employees on the Mud Bay project, driving trucks and backhoes, and crushing gravel. Miller told KCAW in 2010 that the federal dollars were critical.

“It’s definitely given projects like this an opportunity to exist, where possibly the funding wouldn’t have become available for it. I guess it’s been great to have the work.”

Besides resurfacing the road, TM installed two steel bridges, one 80-feet long, and the other 20-feet, and rebuilt the trail to the North Beach cabin with a two-foot layer of gravel.

The bridges are wide enough only for atv’s and small maintenance vehicles, so the rock surface of the road has not been packed down between the larger bridge and Iris Meadows. LaPalme has heard that this stretch of road is rough going for cyclists. Low traffic is partially to blame, but so is the quality of rock on the island.

“Some of it’s like a shale almost, and some of it is granite. Very little of it is volcanic – the cinder doesn’t hold up to well.”

LaPalme expects the surface to improve with use over time, and the water bars to “mellow.” She says that TM has staged two supplies of additional gravel to apply to the road in the future.

Up on West Chichagof, the future is happening now: the much-anticipated replacement of the White Sulfur Springs cabin is underway. Another Sitka contractor, Kelly Pellett, of Pellett Enterprises, has the contract. This might be considered a plum job for a builder except for one small detail:

“He can’t use motorized equipment, and he can’t use mechanized transportation, so he’s very limited about what types of tools he can use.”

White Sulfur is located in the West Chichagof-Yakobi Wilderness Area, and federal rules don’t allow the use of gas-powered equipment. Pellett worked on the Greentop cabin two years ago – also in wilderness. LaPalme says he’s perfected a system that makes sense under the rules.

“He manufactured and assembled these cabins down on Prince of Wales, and disassembled them. So he’s done a lot of the work already.”

The cabin will be constructed from “D” logs, which are flat on one surface.

Despite following wilderness protocol, the White Sulfur project has generated some controversy. Forest planners originally considered eliminating the cabin altogether, along with the bathhouse, to return the site to a condition more in character with wilderness. The Forest Supervisor eventually settled on replacing the cabin – but not the bath house. Now, that decision will be subject to review following numerous appeals in favor of rebuilding the bath house as well.

LaPalme says it’s uncertain about how long it may take to resolve the appeals.

The existing bath house is permanently closed – condemned, in fact, for being structurally unsound. But LaPalme says all is not lost for the intrepid willing to soak al fresco.

“There’s an outdoor pool. It’s relatively shallow, but it’s right next to the bath house, so there’s an alternative place to soak once the site is open again when the cabin is complete.”

The new White Sulfur cabin should be open for users beginning in August.