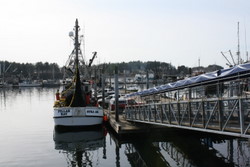 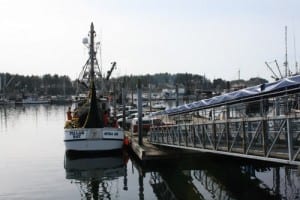 The F/V Pillar Bay is tied up on the workfloat at Eliason Harbor during the 2012 sac roe herring season. Officials say Sitka's harbors -- especially the transient float seen in the background -- are in dire need of repair. (KCAW photo/Ed Ronco)

An increase in Sitka’s moorage rates for harbor users will move forward, but it’s been massively scaled back.

The Sitka Assembly last night advanced only the first year of a five-year plan to increase rates. The move came despite a long report that shows urgent maintenance needs in the city’s harbors.

At the beginning of the meeting last night, the Assembly received the Harbor master plan. The document lays out repairs needed in 16 harbor facilities owned by Sitka.

Click here to read the master plan in PDF form.

Some of the repairs – like a new roof for the Crescent Harbor net shed – need to happen in the next couple years. Others, like new bathrooms at O’Connell Bridge, could wait until 2062.

The Assembly also heard from Harbor maintenance supervisor Ron Pratt. He warned the Assembly that urgent repairs are needed to the Eliason Harbor transient float. Many of the chains underneath are starting to fail.

“The problem is, if you don’t replace them, and they fail, the strain of the opposing chain is going to pull it,” Pratt said. “It’s going to break those brackets. It’s going to peel apart. You’re going to have a 100,000-pound module floating around. And if it’s got boats tied to it, we’ve got a big problem.”

The overall point of the presentation was that the harbors need work, and the city needs a way to pay for it. And that’s where the rates come in. The master plan recommends increases over the next five years. For permanent moorage, the fee goes from $1.90 per foot per month to $5.56 per foot per month by 2017.

The rates across the board – for permanent and transient moorage – increase nearly 200 percent over five years under the plan. Or rather, they did.

The Assembly made a change to the plan last night.

“I know we have to raise rates. We’ve known that for a while. However, I’m not comfortable with doing five years at once,” said Assembly member Thor Christianson. “I don’t like the fact that we don’t take into account any significant state funding out beyond a couple years. The reality is we will get state funding, whether it’s through this current program, or other ways, or direct appropriations, or whatever. There will be (funding), because we have legislators and they want us to be happy.”

Sitka resident Steve Weckel didn’t like the change. He said the Assembly isn’t paying enough attention to the needs of the Harbor Department.

“And then we sit in here and go ‘Well, I think we should lower the rates this much and do this and that and everything.’ That’s a bunch of bull,” Weckel said. “You guys should bite the bullet, get off the dime, and take care of business.”

Assembly member Mike Reif, who proposed only approving one year of the plan, objected to the notion that the Assembly was “kicking the can down the road.”

“It’s saying, ‘We stop kicking the can down the road.’ And now we’re going to look at the can real carefully,” Reif said. “The study did some great groundwork for us, but it also has assumptions we need to look at. We’re going to fine-tune it a bit. That doesn’t mean necessarily cutting the rates. That amendment is saying ‘We accept that study for year one, and now we as a community want to look at that study.’”

There was also an unsuccessful push to get the measure put off until October. Fishermen, including the Alaska Longline Fishermen’s Association, told the Assembly that they wanted a chance to weigh in after summer fishing was complete.

Steffen is also on the Raven Radio board of directors. He said this plan simply brings Sitka up to date on its harbor rates, which were long overdue for an increase. And he said it doesn’t make sense to review the rate increases annually before they’re approved, instead of approving all five years at once.

“You’ve had commission members year after year bring this to your table,” he said, “and you’ve put it off and put it off, and now you say ‘Well, they’re going to review it every year, so that’ll make it all right.’ Well, if you haven’t listened to them for 13 years, what makes you think you’re going to listen to them next January?”

The measure to postpone failed, and the adoption of one year of rate increases moved forward. The Assembly will next consider the measure at its August 14 meeting.