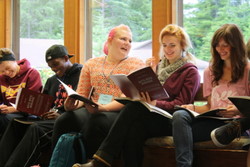 At the high school level, putting on a musical can take anywhere from 8 to 10 weeks. At the Sitka Fine Arts Camp, it takes two.

A group of high school-age students are working through the ambitious rehearsal schedule at the camp’s first-ever two-week musical theater session.

It’s Monday, July 16, the first rehearsal for “Bye Bye Birdie.” The young cast is seated around the outside edges of a circular chapel on the Sheldon Jackson campus. In the middle, music director Andrew Hames explains the show. Conrad Birdie is basically Elvis. Skinny postage stamp Elvis, not sweaty jump-suit Elvis.

“And so, when he signed up for the military, teenage girl hearts broke across the country that ‘Omigosh, he’s going to fight in the war, but we have to support that,'” he says.

In the play, Birdie is coming to the small town of Sweet Apple, Ohio, where he’ll perform one last song before he heads overseas.

The cast begins by reading through the script. When they get to a song, they speak it.

But don’t let this fool you. Three days later, the cast is singing, dancing, they’ve memorized act one and they’re working hard on act two. By that evening, they’ve added an orchestra. And by midway through this week, costumers are fitting cast members, the crew and community volunteers are painting the set, and the cast is doing a lot of polishing.

“Putting up a Broadway musical, they take five weeks. We’re putting on a musical in two,” says Alida Corr of Portsmouth, Rhode Island. She plays Rose.

“This is a very different character for me, because I’ve never been Spanish before,” she says. “We’re having loads of fun. Every single one of us. It’s really long days. Difficult hours. But from the first moment we all walked into the room on Day One, we all knew this is going to be fun, but professional, and we’re just going to get it done and we’re going to have loads of fun doing it.”

“He’s a pushover, in every sense of the word,” Struempler says. “This process is one of the more excruciating artistic things that I’ve been put through. I say that in the lightest words possible because it’s fun.”

Struempler says the all-day rehearsal schedule is developing a work ethic in the cast. And many, like him, want to do this professionally. Struempler attends Interlochen Arts Academy in Michigan. He auditioned for the elite arts school after a conversation last year with WT McRae, the Fine Arts Camp’s director of theater.

“And he was like, ‘Gavin, what do you want to do with your life? Obviously you’re enjoying your art, but what do you want to do?’ And I was like ‘Oh, I like studying this, and I’ve enjoyed these small social aspects of this job, but I can’t find the kind of joy that I collect from art anywhere else,” he said. “And he just stopped me and said, ‘Do it. Just do it.’ I’m afraid of the business, I’m afraid of failure, and all these natural art feelings. ‘Just do it.’”

“I walked in, and I think it was a common thing – I saw certain people and thought ‘I don’t know if we’re going to connect.’ The second day, all of a sudden, everyone knew who everyone else was. And everyone gets along,” she said. “Everyone has so much fun.”

“My experience of working with young people is, if you set a bar, they’ll attain it. I think we frequently underestimate them and don’t push them hard enough,” says WT McRae, director of theater at the Sitka Fine Arts Camp.

He says at that first read-through, there was a lot going through his mind.

“Did we choose right? Are these kids going to be successful in this area?” he said. “Am I challenging each kid? I want to make sure it’s not simple for anyone, that there’s learning happening here.”

Musical theater, he says, is a chiefly American art-form. It was created here, it’s evolved here, and it’s thriving here. And for students in the arts, it is a confluence of the skills they’ve learned.

“It’s the ultimate walking-and-chewing-gum test for a young artist. Can you sing and dance and say lines and be a character, all at the same time?” McRae said. “In terms of why it’s important for kids? Working in the theater creates compassionate, collaborate, hard-working, communal individuals. I believe the theater makes great citizens, and if these kids can learn these skills and take them on to any endeavor that their passion drives them to, they’re going to be better off for it.”

There are lots of philosophical reasons behind why these students wake up early, perform and rehearse all day, go to bed late, and repeat the process. But at this moment, they’re focused on the practical ones. Opening night is not that far away. There are costumes to fit. Dances to perfect. Notes to fine-tune. Lines to remember.

Beyond that? Who knows.