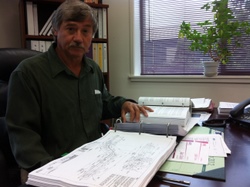 The discrepancy means the city will need to find additional money for one of the most expensive projects in city history. 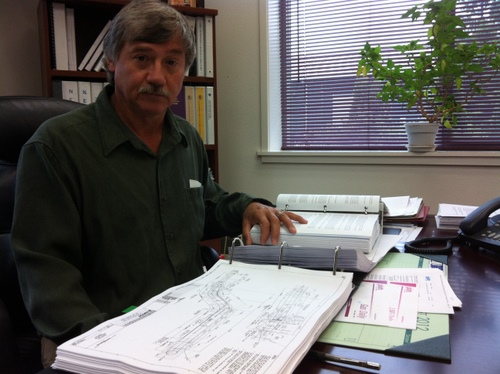 Sitka utility Director Chris Brewton shows the hundreds of pages of documents spelling out the city's construction plans at Blue Lake. Bids for the work came in well above construction estimates prepared by outside engineers. (KCAW photo/Ed Ronco)

When city staff gathered in the municipal clerk’s office on Tuesday to open contractors’ bids, they found numbers nearly twice that amount. The lowest was around $84 million. The highest was about $101 million. 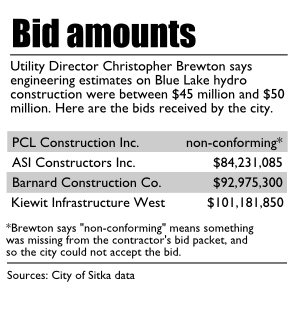 “Yeah, we were a bit surprised. There was more than one chin that hit the floor, I can assure you,” said Chris Brewton, Sitka’s utility director. He says a panel of city staff and outside experts are studying the bids to find out why the estimate was so far off.

“Did our bid miss something? A gross error? Did we grossly underestimate something? Did the contractors catch something we weren’t aware of?” he said. “I’m really curious to see, on a line-item basis, where the disparity lies.”

KCAW called Hatch’s office in Seattle but the company did not want to talk on tape. Neither did two of the companies that entered bids. ASI Constructors in Colorado and Barnard Construction in Montana both said they didn’t want to talk while the procurement process was active. The third company, Kiewit Infrastructure West, could not be reached on deadline.

So we turned to John Schaufelberger, chairman of the Construction Management department at the University of Washington’s Engineering College in Seattle.

Schaufelberger’s research is in contract procurement and project delivery methods. We asked him if it’s common for there to be disparities between the estimates engineers provide and the prices that contractors send back.

“The contractor’s price is going to be based on the risk that he or she is being asked to assume, and what are the market conditions,” Schaufelberger said. “If there’s not a lot of projects then the profit margins tend to be smaller than they are when there’s plenty of projects around. So it’s very common for the estimate to be different.”

But not this different, he says. Schaufelberger acknowledges he’s not worked on the Blue Lake project, nor has he reviewed the hundreds of pages of documents outlining the city’s needs. But if he had?

“The first thing I would do is I would ask one of these contractors to come in and ask them to show me how they came up with their price, and I would compare it with what the estimator did, and try to figure out where there’s a difference,” he said. “There’s something that caused the contractor to bid those higher numbers, and that needs to be determined, I think. It’s possible it can be mitigated, to some extent, by some decisions the city might be willing to make.”

Sitka’s not the only city in Southeast Alaska dealing with this situation. To a smaller degree, so is Ketchikan. The Whitman Lake hydro project has been in the works for 25 years. Thursday night, the Ketchikan City Council put off a vote on the project after bids came in $12 million over the engineering estimates. Those estimates were also prepared by Hatch, the company that did Sitka’s work.

Putting off the Blue Lake project in Sitka is not a possibility. Brewton, at the Electric Department, says the expansion of the Blue Lake dam needs to happen, and that the work will only get more expensive with time. The city already has spent millions on preparation work, reports, consulting, engineering and clearing regulatory hurdles.

State Sen. Bert Stedman, R-Sitka, has been following Blue Lake closely. In addition to serving as chairman of the Senate Finance Committee, which writes the state’s capital budget, he’s also a Sitka resident. He says there are lots of options, including ways the state can help. But he says it’s too early to say which option is best. He can, however, point to which option he thinks is the worst.

“The option that should not be the executed solution is to put our rates at 16 or 17 cents a kilowatt (hour),” he said. “To me, it’s going to be economic lights out for the town.”

Stedman says raising rates significantly will push commerce away from Sitka. He plans to meet with city officials once they’ve had a chance to work on some numbers.

And until then, the electric department’s Brewton is calling for Sitkans to follow that old British World War II maxim: Keep calm and carry on.

Brewton says he’s disappointed the bids are so much higher than the estimates, but that it’s important to give his staff time to come up with options and present them for public debate.

“The question that I want folks to remember is this: This is the cost to do it, but think of what the cost is not to do it,” he said. “We’re out of hydro, we’ve been running diesel, we’ve turned away business from this community because we couldn’t provide electricity.”

And he says, the longer Sitka waits to raise the Blue Lake dam, the more expensive it will be to do it.

The Assembly will get an update at its next meeting on August 14, and will likely be asked to award a contract by early September.