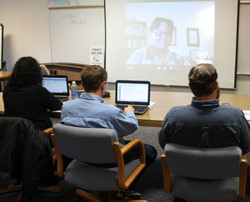 Teachers are doing a good job, students are eager to succeed and parents are invested in what’s going on. But the Sitka School District needs to make sure all three of those groups are on the same page when it comes to math education.

That’s the finding of an audit on the way Sitka teaches math. The $18,000 project was commissioned by the Sitka School District last year. Results were presented to the school board Monday.

Listen and read our story below, or click here to read the full-text of the audit. 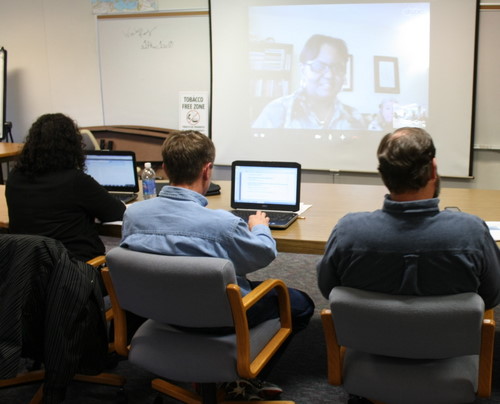 Sitka School Board members talk by Skype to Trina Davis, one of the Texas A&M researchers who recently completed an audit of Sitka's math curriculum. The audit team presented its results to the school board on Monday. (KCAW photo/Ed Ronco)

The result is a 55-page document that looks at how the district is teaching math from kindergarten through 12th grade, and what can be done to strengthen it. The report uses a lot of educational terminology, so I asked for help.

“So, what we did was, we looked at how the students had been doing over a prolonged period of time,” said Robert Capraro, an associate professor in the mathematics education department at Texas A&M. He’s one-third of the team that wrote Sitka’s math audit. “We also looked at what the curriculum was during that period of time, and we looked at how the teachers were enacting the curriculum.”

Vertical alignment, on the other hand, makes sure that what’s being taught in third grade is enough to make kids ready for fourth grade. This is math we’re discussing, so here’s an example:

“Let’s talk about fractions,” Capraro said. “If I’m the teacher who’s supposed to be teaching adding, subtracting, multiplying and dividing by fractions, then I’ve got to make sure the teacher who had them before me really taught the idea of partitioning wholes.”

The idea behind vertical and horizontal alignment is that one grade’s lessons should feed into the next, and that within a grade, everyone is on the same metaphorical page.

The researchers wrote that classroom visits were fruitful, and that teachers were really good at working with all of their students. But the report also says the district would benefit from giving them more professional development, and from finding better ways to measure student success.

The report also cites feedback from students and parents. The report says parents were very complimentary toward teachers, but they weren’t thrilled with the district’s textbooks.

Only 29 percent of parents said they were happy with the textbooks. Some said they couldn’t help their students with homework because the books weren’t clear or didn’t have examples. One parent reported using Google instead of the book to find easier ways to figure out problems. Even parents who said they’re comfortable with math reported having difficulty with their child’s textbook.

“So there was a lot of pressure on the audit team to make a curriculum recommendation, to either stay or change,” he said.

But Capraro says it’s not the role of the audit team to support or condemn materials a district is using. That said, they did point out that switching materials comes with its own set of problems.

“There are huge people costs, as well as dollar costs for changing a curriculum,” he said.

Capraro says there are free materials out there, but “they’re about worth what you pay for them.” The others cost anywhere from $30 per student to adopt, on up to $500 or $600 per student. Then, there’s what he calls the people cost.

“When you have to re-train a faculty in order to implement a new curriculum effectively, you have to basically teach those teachers how to teach that curriculum,” he said. “So there’s a whole year where instead of focusing on teaching children, they’re working on teaching themselves.”

Nor, he says, will it work to just slap new materials in front of teachers and say “go.” In the very last paragraph of the report, the auditors write that poor execution of good material is the same as good execution of terrible material.

“As an analogy,” they write, “the best captain, with the best crew, most state of the art equipment, and best electronics money can buy who fishes in a bathtub, isn’t going to catch any fish.”

School Board president Lon Garrison says the report has a lot of useful information and that the board will have more conversations about what to do with it. Any changes, he says, will be phased in over time.