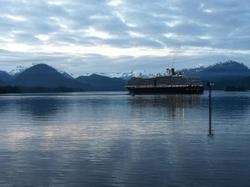 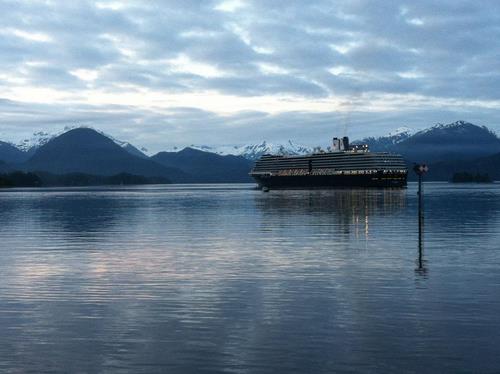 The Holland America ship Westerdam sits at anchor near Sitka in the early morning hours of July 4. The Assembly voted Tuesday night to nix a ballot question that would ask voters whether they want a dock for vessels such as this. (KCAW photo/Ed Ronco)

Sitka residents will not vote on a cruise ship dock this fall.

The Assembly killed a measure Tuesday night that have asked voters whether the city should go after funding for a deep-water dock near downtown. Right now, ships anchor in Sitka Sound and transport passengers to shore aboard smaller boats.

There were concerns that too little was known about whether a dock would help and that the ballot question was too vague.

Others looked to a dock built by Halibut Point Marine. The private dock is known as “the McGraw dock,” after the company’s owners. It’s equipped for large vessels, but sits about 5 miles away from the center of town.

“We don’t know what’s going to happen,” said Assembly member Mike Reif. “If the cruise ships in a year or two do not choose to use McGraw docks, this is a very viable option of doing something downtown. But we haven’t given it a fair shake.”

Reif said Halibut Point Marine is trying hard to attract ships and should be encouraged to continue that effort.

The Sitka Chamber of Commerce was among those pushing for the Assembly to hold off on the dock question. In a resolution, the Chamber said it supports more cruise traffic for Sitka, but that there was no guarantee a dock would bring more ships. The organization was also worried about the potential message sent by voter rejection. It asked the Assembly to do more research and wait until 2013 to put the dock question on the ballot.

Sitka voters rejected a downtown dock in 1998. And there was some hope among proponents of this year’s measure that attitudes had changed. Whether they have will remain a mystery, but Assembly member Bill Paden said he noticed this time around, the tone of the conversation was certainly different.

“I was on the Assembly the last time this issue came up. A lot of people didn’t have really good reasons why they didn’t want the dock there, but they didn’t want the dock there,” he said. “This time, I’ve got some calls from people that actually were talking about alternative solutions, other ways to market our town. There are some really thoughtful reasons as to why they would rather not see a dock at this time.”

The Assembly’s rejection of the measure was unanimous. Mayor Cheryl Westover and Assembly member Pete Esquiro were absent. Esquiro’s plane was fogged out, and Westover is at the Alaska Municipal League conference in Bethel.

Harbor measure advances
Harbor rates in Sitka could go up in October. The jumps are bigger for daily transient users than those with permanent slips. 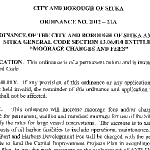 PDF: Click here to see the new rates, as explained in the ordinance.

How much your harbor bill goes up depends on how you use the harbor. If you have permanent moorage it’s a 40 percent jump. But if you have a large boat – say, longer than 150 feet — and you get billed for daily transient moorage, it’s a 150 percent increase.

The measure advanced Tuesday night would take effect in October. It’s a significant increase, but the first one in years. And it’s just one increase. At its previous meeting, the Assembly was considering a five-year plan to increase harbor rates.

Reif proposed just dealing with one year. Future years’ rates can be reviewed in January by the Ports and Harbor Commission. But Reif said that should happen sooner.

“I would suggest we as a body try to facilitate for that to happen this fall, when the commercial fishermen are here, coming in, and not to wait until January,” Reif said. “They really want to weigh in on this. That will allow us, then, and the Port and Harbors (Commission) to see what is year 2 through 5 are really going to look like.”

A variety of fishermen, including members of the Alaska Longline Fishermen’s Association and some salmon trollers, wrote to the Assembly and asked them to hold off on a decision until after they returned from fishing.

The next year’s rate increases could be finalized at the end of this month, but Assembly members seemed to agree that fishermen should have a say on future years this fall. 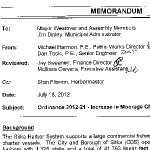 If approved, the additional money will pay for repairs that city officials say are coming due. Last night, for example, the Assembly approved $70,000 for work on the transient float. Engineers told the Assembly in late July that parts of the massive structure are in danger of breaking loose.

The city has more than 40,000 linear feet of moorage, spread over more than 1,300 stalls. That’s in addition to work floats, tidal grids, a seaplane base, parking and buildings on shore.

A master plan estimates it will take $38 million in the next five years to keep up with replacement needs.

Assembly member Phyllis Hackett, herself a harbor user, said she favored the year-by-year approach to rate hikes, because it keeps Sitka on pace with other communities.

“We looked at the rates around the region, and they mentioned that other harbors in the region are also in disrepair and will, at some point, be undergoing this type of process that we are, to be able to do repair and whatnot,” she said.

Sitka’s new rates make the city’s five harbors cheaper than Juneau or Petersburg. But the rates put Sitka above those in Ketchikan, Haines and Wrangell.

Nobody from the public testified on harbor rates Tuesday. The measure to increase rates for next year is scheduled to appear at the Assembly’s next meeting, on Aug. 28.