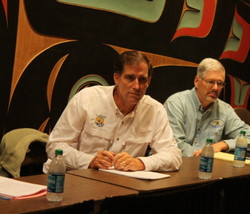 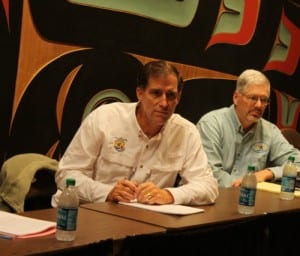 The head of the U.S. Fish and Wildlife Service came to Sitka over the weekend to hear concerns about sea otters.

The marine mammals are protected by federal law, but Alaska Natives are allowed to hunt them. Some of them say the regulations on what they can do with otter pelts are confusing, and have led to scrapes with the law.

Meanwhile, commercial fishermen who dive for shellfish in Southeast Alaska say expanding otter populations are wiping out their fisheries.

Around the table on Saturday sat dive fishermen, Native otter hunters, and local artists who use otter pelts. And in the middle of the group was Dan Ashe, the director of the U.S. Fish & Wildlife Service. He heard stories like this one, from Boyd Didrickson:

“Seven years, thinking I was going to go to prison, because you guys told me I broke the law, because I put a zipper in my coat, and I put two snaps in my hat. For seven years I was scared to death,” Didrickson said.

His story goes back to the 1980s when federal agents seized a parka and hat he’d made out of sea otter pelts. Didrickson added a metal zipper to the parka and metal snaps to the hat. The government said it did not qualify as “traditional,” and as a result could not be sold. A federal judge in Anchorage ended up ruling in Didrickson’s favor by saying the government misinterpreted its rules.

“You busted me three times on three things,” Didrickson said. “And I won every case. It’s just that it’s ‘significantly altered.’ I know what that means.”

But, said Didrickson and the others, not everyone does. He said a lot of ambiguity remains, especially when it comes to different federal agents having a different take on what counts as a “significantly altered” otter pelt.

“It comes up all the time, because it’s not clearly defined,” said Mike Miller. He’s on the Sitka Tribe of Alaska’s Tribal Council. He’s also on its marine mammal commission. “That causes a lot of angst, because one person’s interpretation from another’s is going to be different.”

During a break in the meeting, Ashe told reporters that he understood the frustration. Changes, he said, will come, but they will come over time.

“I think there is some common ground here, and I think the key is to try to make a step forward and not try to bite off too much,” he said.

One idea is to have a workshop on new regulations, where stakeholders get together and make sure they’re clear on the meanings. Ashe says it would be a good way to reach clarity on some of the government’s definitions.

“Significantly altered, as you heard. Coastal dwelling people. Mass production,” Ashe said. “There are some key terms that we can bring some clarity to, and hopefully that’s a step forward and a platform from which then we can build trust and strengthen our relationships and then go forward from there.”

The other main area of concern at Saturday’s meeting was about population.

Sea otters were vanquished from Southeast Alaska by fur traders in the 18th and 19th centuries, and reintroduced in the late 1960s. The population took off about 20 years later, and continues to grow. Dive fishermen go for the same thing sea otters eat – urchins, sea cucumbers and geoducks, for example. But lately, says dive fishermen Larry Trani, the otters are winning.

“On the geoducks, it’s totally amazing to think of this geoduck bed that can go from here to the fuel tanks over here, and you swim on that area, and you have wall-to-wall craters,” Trani said. “It looks like a bombing range. It’s just absolutely amazing that they’re that active.”

That otters are feasting on local shellfish is also a concern for subsistence gatherers, says Wade Martin.

There appeared to be some confusion on Saturday about whose meeting it was. The Fish & Wildlife Service made the visit at the request of Sen. Lisa Murkowski. But Murkowski’s office said it was up to Fish & Wildlife about whether the meeting was open to the public. The Sitka Tribe hosted the event at its community house, although the Tribe didn’t say it was the organizer of the meetings either.

In the end, reporters were allowed to listen to the first part of the meeting, which was a general discussion of issues. A subsequent conversation, where individual otter hunters and craftsmen talked about their specific experiences with law enforcement, was closed to news media.

Afterward, Miller, from the Sitka Tribe, said he thought the time was well-spent on Saturday, and that he appreciated that Ashe took time to visit. But he stopped short of calling it a success. That, he says, will depend on what changes, if any, come as a result.