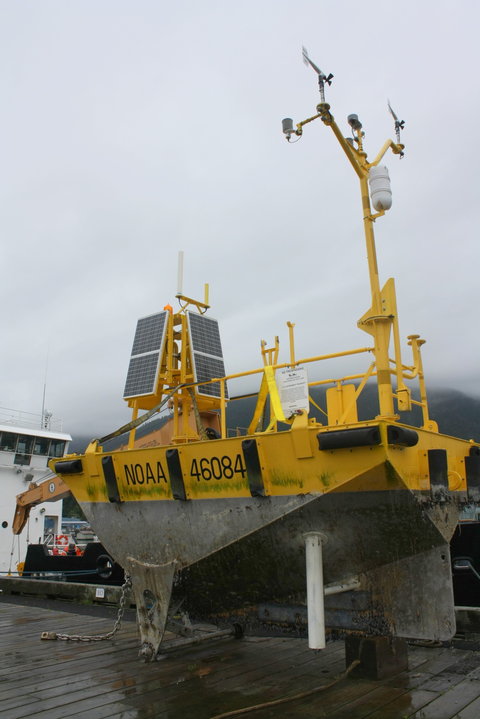 The Cape Edgecumbe weather buoy sits on the pier near the USCGC Maple on Tuesday afternoon. The Maple retrieved the buoy after it broke its moorings last week. (KCAW photo/Ed Ronco)

This time, it’s the story of the buoy that didn’t get away.

The buoy was only about ten miles off station, dutifully transmitting weather and ocean conditions as it slowly cruised north and west in the balmiest seas of the summer.

Last time the Cape Edgecumbe buoy broke loose – in winter – it drifted 400 miles before anyone caught it.

Lt. Ray Reichl is the executive officer of the Sitka-based cutter Maple. As these things go, picking up the buoy was a breeze – if that.

“When we were able to get up on scene, seas were less than one foot. We didn’t have any registering winds at the time and we were safely able to get up alongside of it and bring it aboard without damaging any of the sensors.”

The Cape Edgecumbe buoy is 6 meters long, or around 18 feet. It’s really more like a small boat than a traditional navigational can or nun. And, like Reichl says, it’s fairly bristling with equipment.

The Maple brought the buoy back to Sitka. Resetting the buoy where it broke off was impossible at the time. Reichl says it requires about a mile-and-a-half of specialized mooring gear and a six-ton concrete anchor.

“It had about 7,000 feet of line in multiple segments, and it broke somewhere in the third segment. So, we recovered just over half the line, and it had just parted somewhere in the middle of that section. So we’re not sure if it had gotten fouled up on something, or if it was a weak spot in the line itself. But it wasn’t at one of the connection points and it wasn’t at the sinker itself. The sinker is still there with part of the mooring, so we’ll have to bring out a whole new mooring system for that, and the sinker will be about 12,000 pounds again.”

The failed mooring dates from 2008, when the buoy broke loose in a fierce winter storm and began a 400-mile odyssey across the gulf, first swinging north into Yakutat Bay, and then heading west to Cape St. Elias, where it eventually beached near Kayak Island. The National Data Buoy Center recovered “84,” as it’s called in officialdom, refurbished it, and put it back into the rotation with the three other weather buoys stationed offshore between Dixon Entrance and Cape Suckling.

84 has continued to be NDBC’s problem child. It’s been replaced twice since it got away in 2008. Once in 2011, and then again just this past June, after its predecessor had spent nearly a year failing.

Just as the Cape Edgecumbe buoy is too expensive and sophisticated an instrument to let it go wandering, it’s also too important to mariners and weather forecasters to let it sit on the dock for long.

Lt. Reichl says the NDBC is shipping up a new mooring and equipment to allow the Maple to attempt to reset the 84 buoy – and to repair another buoy, 85, or the Central Gulf buoy – this October.

Conditions offshore in October are typically a lot different than August. If they get an opening, Reichl thinks the crew of the Maple can do the job.

“Weather conditions are best at best at six feet (sea height) or less to be able to safely get that over, because again we don’t want to damage any of those sensors in the process of setting up the mooring. There will be a lot less safe weather windows to do it, but there should be some available in that timeframe of the year.”

In the meantime, the Cape Edgecumbe buoy continues to perform perfectly. Reichl says its battery of instruments is functioning, relaying weather and sea height from its very solid perch on the Coast Guard pier. The National Data Buoy Center has stopped updating the buoy’s public website, however, to prevent someone from mistaking conditions on dry land in a sheltered harbor for autumn 45 miles offshore in the Gulf of Alaska.