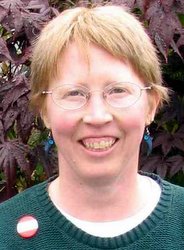 Putz is one of five candidates vying for three open assembly seats in this October’s municipal election, but she’s the only candidate – other than the incumbents — to have run before.
Click here for iFriendly audio.
In her seven years in Sitka, it’s probably fair to say that Michelle Putz has not maintained a very low profile. She’s been active in many different activities and organizations – the Sitka Global Warming Group primarily – and feels she has an aptitude for politics.

“I’ve kind of learned over time that I have a strategic mind. If people give me a sense of where we’re at, and this is where we want to be, I’m really good at seeing that starting point, that end point, different ways to get there, and the problems in between.”

Putz has also volunteered at Raven Radio, where her husband, Perry Edwards, is a current board member. They both work for the Forest Service in Sitka, where Putz is a writer/editor.

Putz says her reputation for activism sometimes masks her no-nonsense approach to local government. She says she knows how a checkbook works, and she does not want Sitka to overdraw.

But that doesn’t mean she doesn’t want to know what it’s going to cost before she writes that check. Road maintenance is current problem in town. As an assembly member, she would want to know the full spectrum of possibilities.

The Blue Lake hydro expansion is another fiscal dilemma. The lowest bid is 70-percent over the engineer’s estimate for the project. Putz says Sitka can’t back away from the problem.

“The cost is not going to go down because you decide to stop. We’re going to need it. I think the city’s doing great trying to get people to conserve, but I don’t see us conserving ourselves into a spot where we have enough electricity.”

Putz and her husband made headlines last year when they installed solar panels on their home to help lower their consumption of municipal power. They also converted their Geo Metro to electricity. Putz is unabashedly green, but she says it’s only one facet of her approach to government.

“Almost all Sitkans want to protect the great things that we have here. We need to have fish for the fishermen. We need to have clean water for those fish. We need clean air to breathe. We know we need it – we need the planet to survive. That’s okay. How do we work within the constraints we have to make it a better community?”

Putz is the only non-incumbent in this year’s election to have run before. She didn’t make it in 2010, and the assembly has declined to appoint her twice to open seats for which she has applied. Putz is undeterred.

“It is crazy, running. I didn’t realize how hard it was to run for a spot like this until last time. But it was also amazing: seven-hundred-and-some people voted for me and, I could tell you, I don’t know seven-hundred-and-some people in Sitka well enough to say, Vote for me. So, the support that I felt from the community even though I didn’t win was still pretty darn amazing.”

Actually, Putz took 1042 votes in that election – an amount that might have won her a seat in some years. She’s hoping to get there this year, but only $5 at a time, please.

“I wanted people not to feel as if they had any say over what I was going to do. This way there’s not that $100 donor out there, or a group of $100 donors. They each give $5, and I work my butt off for everybody.”

Michelle Putz is one of five candidates for three open seats on the Sitka assembly. The municipal election is Tuesday, October 2nd.

Ed Ronco contributed to this story.