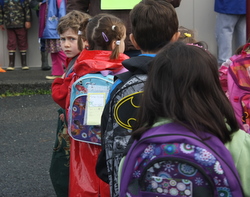 Baranof Elementary School has more kindergarteners than it planned for this year. As a result, Sitka School District officials added an extra teacher, just five days before the start of school.

They say the scramble was worth it, as the first days of school are among the most important in a student’s education.

It’s 7:30 a.m. inside the Hitchcock household, and 5-year-old Connor is getting ready for his first day of school.

He grabs a blue backpack with soccer ball patches and his name, embroidered in green on the front.

“Mom! This didn’t go in there,” he says, pulling a folder out of the backpack. His mom, Bridget Hitchcock, asks him if he’s sure about that.

“I know, but it doesn’t go in that place in the backpack,” he says, stuffing the folder into a different part of the bag. “It goes in the second one.”

A short car ride later, and Connor is on the playground at Baranof Elementary School. He surveys the dozens of children who are running around, steps onto the gravel, and finds the line for his class, but not before looking back at mom and dad.

A whistle blows, and the students head inside to start the day.

Connor Hitchcock is one of 120 kindergarteners enrolled at Baranof Elementary this year. That’s a dozen more students than last year.

“And when that happens, that’s why we end up at the last minute trying to scramble, and add another teacher,” she said. “Because if we’d known of those numbers in the spring, we’d have known what our population was going to be, or had a better feel for it.”

The extra students raised the student to teacher ratio in Baranof’s six kindergarten classrooms to approximately 20-to-1. School officials thought that was too much, and quickly decided to add a new teacher.

“It happened very fast. In fact, I’m still trying to catch up,” said Rachel Sorokin, the new teacher. She was hired on a Friday afternoon. “And I was ecstatic. I was jumping up and down – so excited about that. Couldn’t wait to get started. Little did I know it meant getting started in just a few hours, because then I was right in the classroom getting it all ready for the first day of school.”

School started the following Wednesday. The addition of a new teacher was fast, and expensive – an extra $75,000 when you factor in salary and benefits. It means kindergarten class sizes are now between 16 and 18 students, instead of 20 or more. But Beach and teachers agree that small change makes a big difference.

“Kids that are crowded are not happy kids,” said Linda Fredrickson.

Fredrickson is Connor’s teacher. This is her 23rd first day of kindergarten, and she sees the same thing every year.

“It becomes an issue of ‘You’re sitting too close to me,’ or ‘He’s touching my stuff,'” she said. “Kindergarteners are pretty egocentric. They’re concerned about themselves, and it’s really hard for them to see that they’re in a classroom of 18 to 20 kids.”

The most comprehensive study was called PROJECT STAR, conducted in Tennessee in the mid-1980s. It compared classes with an average of 15 students to classes of 22 to 25, and found an increase in achievement in the smaller classes.

Back in Fredrickson’s classroom, playtime is over. The students sit in rows on the floor, and listen intently in front of a big easel marked “Morning Jobs.”

Connor, in the back of the group, chimes in. He tells her about the list he uses at the beginning of the day, to make sure he has everything he needs for school.

Fredrickson says young children require a lot of attention, because they’re still learning how to sit quietly, listen, share, hold a pencil and eventually get down to work.

Parents Bridget and Randy Hitchcock say Connor has been getting ready for kindergarten for a long time.

“Actually, like the last month: ‘How many weeks and how many days?’ So he’s been really looking forward to it,” Bridget Hitchcock said. “Every time we mention anything to do with kindergarten, he’s like ‘YEAH!’”