The village of Kake is on Keku Strait, 38 miles northwest of Petersburg and 95 miles southwest of Juneau. A local contractor starts soon on a Forest Service project tailored for local businesses. Photo by Melati Kaye.

Luther Coby lives in Kake, a village of about 600 on the northwest coast of Southeast’s Kupreanof Island.

His business, CSC Tree Service, was recently awarded a contract for some small Forest Service projects about 15 miles from town.

But he has to wait.

“The moose season started and there’s going to be a lot of people driving back and forth. So I’m just waiting for the big bang starting out, everybody’s all excited about hunting, and give them a few days to calm down and there won’t be as many people out there,” Coby says.

What’s called the Little John Stewardship Project will replace or repair some deteriorating culverts and bridges.

Coby says he and two other residents will work on the project.

“They money I make on this job goes back into the community, like the gas, the wages, equipment rentals. … These small villages, they really need stuff like that,” Coby says.

The contract was originally larger and included tree-thinning and other timber work. But the Forest Service scaled it back, making it easier for local businesses to compete. The logging component could become part of a separate contract.

The changes came after meetings with local businesses, conservation groups and others. Tom Parker is an agency resource planning supervisor. 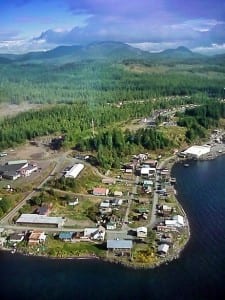 Kake’s main employers are the city, the school district and Kake Tribal Corporation. Unemployment is high, as are fuel prices.

is working heavily on collaboration with local communities and it’s an emphasis that I see coming from the Forest [Service] itself as well as from our district ranger, who brings over a lot of experience from the Thorne Bay Ranger District and a lot of collaborative efforts over there,” Parker says.

The Forest Service also purchased and shipped in supplies and materials because Kake businesses could not afford to buy them up front. That practice also saved some money.

The work will help improve salmon streams in the area. Old and damaged culverts can act as barriers for fish returning to spawn.

The Southeast Alaska Conservation Council, a coalition of environmental groups, was among those collaborating on the project. Community Organizer Daven Hafey says it was a success.

Coby, of CSC Tree Service, says he’s been awarded two other small Forest Service contracts. And he’d like to see more on the table. He says one could turn trees that mills don’t want into a marketable product.

“There’s a lot of timber out here in the Kake area, a lot of stuff not merchantable as lumber. But you can have a firewood processor right on site and you can be cutting up firewood and then bring it in on big trailers and dump it and let it sit for a couple years and let it season under a roof and … sell it as packaged firewood,” he says.

SEACC’s Hafey says the group is involved in similar efforts in the Wrangell and Hoonah areas. It’s among conservation groups working with the Forest Service on its transition from large-scale logging to restoration.

“All those are multi-intentioned. They’re all geared toward improving subsistence use, ecological health of watersheds and putting locals to work rather than bringing folks in from outside and employing them for a few months and then sending them back home,” Hafey says.

Many in the timber industry say the transition is bad for the region.

Critics point out that a small contract’s value – $26,000 in this case – is just a fraction of what one logger could make in a year.

Read and hear an earlier report on the transition to restoration in the Tongass.