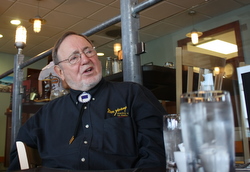 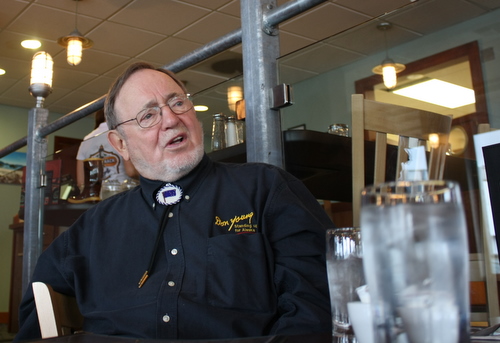 U.S. Rep. Don Young talks to reporters at the Dock Shack restaurant in Sitka on Saturday morning. Young has represented Alaska in the House since 1973, and is running again for re-election this year. (Photo by Ed Ronco/KCAW)

U.S. Rep. Don Young, R-Alaska, says Washington is broken, the Senate is stuck, and that Mitt Romney will win the presidential election in November.

The 79-year-old Republican has been in the U.S. House since 1973, and is running for re-election this year against state Rep. Sharon Cissna. He was in Sitka to speak at a fundraising dinner Friday night. He talked to reporters over breakfast the next morning.

It’s 10 a.m. Saturday at the Dock Shack Café in Sitka. Young sits down at a table near the front of the restaurant and orders two pancakes, three strips of bacon and two eggs.

The eggs are over easy, but Young says the federal government is scrambled. He takes aim at the Forest Service, and laments the decline of Southeast Alaska’s timber industry.

Young says large scale logging isn’t coming back and that Forest Service’s shift toward restoration has hamstrung use of the region’s resources. That said, the Tongass is still home to smaller scale operations.

Development struggles are frequent in Alaska, and one of the big ones last year focused on coastal zone management. The state’s program – which many said gave Alaska a stronger voice in federal decisions – folded after 30 years when the Legislature and the Parnell administration failed to reauthorize it in 2011. And a citizen initiative to restore it was defeated two-to-one in August. That’s fine by Young.

Young: “It’s just another layer of government that impedes the communities. We don’t need more government. Government produces nothing. It consumes money.”
KCAW: “A lot of coastal community leaders, though, would say that coastal zone management was their voice. So…”
Young: “Voice in what?”
KCAW: “… their voice in development projects in the area, so how do they keep…”
Young: “I don’t think so. I think you have your own voice right here. You don’t need a coastal state management program. You can do it yourself.”
KCAW: “Is that through speaking up to the right legislators or through normal ways of… I mean, how does that happen?”
Young: “How can you develop anything if the city doesn’t agree to it?”
Tom Hesse, Daily Sitka Sentinel: “Well, based on the coastal zone management program, if the city didn’t have the say in the federal lands, it would…”
Young: “Well, you still don’t have a say in federal lands. What have you got to say? They can do what they want to do.”

Also on the table this Saturday morning, hydropower. It’s a primary source of electricity for many Southeast communities. Places like Sitka are trying to expand their capacity, and having trouble getting money from the federal government. In Sitka, the Blue Lake hydro expansion contracts came back millions of dollars over engineering estimates.

“I’m going to suggest they put (the contracts) out to bid again,” Young said. “But we’re going to try to work with the state and the federal government and see if we can’t get money. The idea that we’re burning any diesel fuel or any heating oil in Southeast Alaska is ridiculous.”

Maybe the biggest piece of legislation impacting Southeast Alaska in Congress at the moment is the Sealaska lands selection bill. It would allow the regional Native corporation to select land outside the original boundaries set up in 1971. Young’s version has passed the House. A Senate version, sponsored by Sen. Lisa Murkowski, is still in committee.

Young says he doesn’t know how his bill will fare in the Senate, and that we’d have to ask the Senate that question. But he did have plenty to say about gridlock in D.C., specifically, who he thinks is responsible.

“Harry Reid,” he said. “He’s probably the worst (Senate) Majority Leader I’ve ever witnessed and I know him personally. I don’t think he’s malicious. He couldn’t lead himself out of a dark tunnel if the light was at the other end. We’ve passed 22 good energy-job bills through the Senate. They don’t have to agree with what we’ve passed, but they ought to work on the issue and send it back to us and see if we can reach some type of agreement. He won’t do that.”

Young says he expects the GOP to pick up four seats in the House, but have a harder time in the Senate. Republican Rep. Todd Akin’s candidacy in Missouri has been hindered by comments he made about rape this summer, and Massachusetts Sen. Scott Brown is waging a close campaign against Democrat Elizabeth Warren.

He’s more assured when it comes to the White House, which Young says Republican nominee Mitt Romney will win in November. That prediction comes despite polls that show President Obama with a slight edge.

“There’s no reason to get upset watching these bobbleheads. That’s what they are. CNN, Fox News, NBC, CBS and all the rest of them are all bobbleheads,” Young said. “We’ve got a poll today, a poll here, a poll there, and it’s all nonsense. Most people… they call me up and I don’t even answer it. A lot of people are fed up. So I think you’ll see a pleasant result for myself and the party in November.”

Young, meanwhile, faces a challenge from Democratic State Representative Sharon Cissna as he runs for his 21st term in the U.S. House.