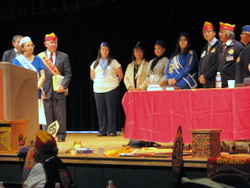 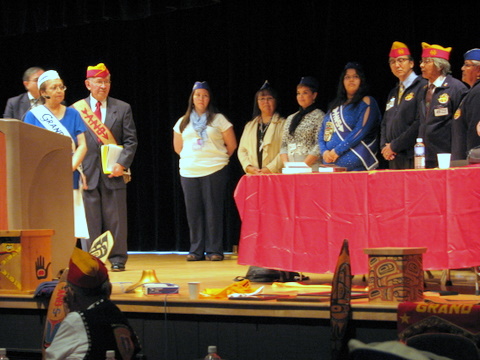 The 100th anniversary Grand Camp Convention of the Alaska Native Brotherhood and Alaska Native Sisterhood opened in Sitka this morning (Wed Oct 3, 2012). Hundreds of delegates from around Southeast were in attendance.

Grand President Dennis Demmert, of Klawock, tried to iron out a few agenda issues at first, but delegates insisted on singing “Onward Christian Soldiers” – a Grand Camp tradition – before moving on to any business.

Chris McNeil, the president and CEO of Sealaska, Inc., used his time at the podium to remind delegates of the power of the Native vote. He said redistricting has left Southeast’s two Native legislators – Rep. Bill Thomas and Sen. Albert Kookesh – vulnerable, despite the protections of the Voting Rights Act of 1965.

“What is needed now is for Native leaders to explore other ways to be able to assert our voting rights. With the enactment of ANCSA forty years ago, we knew that creating corporations with economic power would help us politically. Sealaska will continue to participate in the public policy process, but in the end it all comes down to the vote.”

McNeil directed the delegates to registrars present from the National Congress of American Indians, who along with the Tlingit & Haida Central Council and SEARHC were cooperating on a non-partisan voter-registration drive.

He said registering Native voters was consistent with the traditions of the ANB/ANS.

“So, we’re reminding our people that every vote counts. Your vote is our power. That, together with the Alaska Natives who are eligible to vote represent almost 17-percent of Alaska’s population. And we know that every vote makes a difference.”

And finally, today (Wednesday), the Grand Camp delegates motioned to establish “Walter Soboleff Day” in honor the Tlingit leader and pastor who died in Juneau last year at the age of 102. Grand President Dennis Demmert said the holiday would be a natural counterpart to Elizabeth Peratrovich Day.

ANS Grand President Mary Brown itemized Soboleff’s many accomplishments, everything from paving the way for the Alaska Native Claims Settlement Act, to organizing the Gold Medal basketball tournament. With Soboleff’s children gathered behind her, Brown introduced the resolution.

“And now therefore be it resolved that the Alaska Native Brotherhood and the Alaska Native Sisterhood assembled in 2012, the Centennial year of the ANB, declare that they shall observe November 14, the day of his birth in 1908, as Walter Soboleff Day, and encourage all ANB and ANS camps to come together to revitalize cultural knowledge, and to renew the ANB/ANS commitment to the Native cultural values that Dr. Walter Soboleff exemplified.”

The resolution carried by unanimous consent.

The centennial Grand Camp Convention of the Alaska Native Brotherhood and Alaska Native Sisterhood continues through Friday night in Sitka.