In Sitka, a rubbery farewell to cruise ships 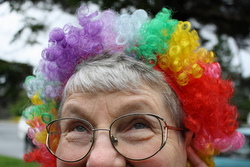 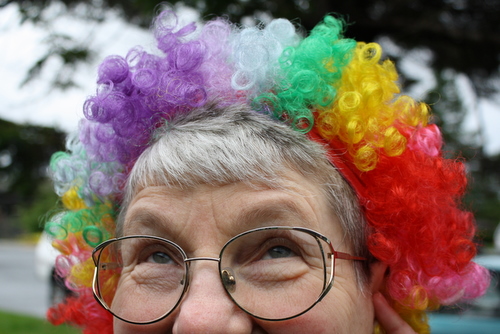 Jude Reis shows off her wig at the Running of the Boots on Sept. 29 in Sitka. “It’s my natural color,” she said. VIEW A PHOTO GALLERY. (Photo by Ed Ronco/KCAW)

In Southeast Alaska, the end of the cruise ship visits is as much a signal of the seasons changing as the weather. And in Sitka, the residents have created something of a ritual to mark the season’s end. “The Running of the Boots” is a fundraiser for the Sitka Local Foods Network, and its history is as colorful as its present.

Under a shelter at Sitka’s Crescent Harbor, people are beginning to gather in costumes. The Statue of Liberty is here, a lumber jack, a group of kids dressed as a bouquet of flowers, and then there’s Jude Reis.

“… and then I have some kind of Hawaiian, bright red pants with different colored flowers,” she says. “I’m a flower child, you know.”

Above that, a tie-dye T-shirt.

“Oh, yes, and then to top it all off I have this multi-colored, brightly colored wiggy curly thing,” she said.

This is the Running of the Boots. Sitkans gather at the harbor and, wearing their rubber boots, run the length of downtown and back. It all began in 1995. Resident Sheila Finkenbinder was listening to a show on KCAW. It was playing Spanish music, and the host – who now happens to be the station’s general manager – was talking about the Running of the Bulls in Pamplona, Spain.

“And so he said, ‘You know, we should have a running of the boots here in Sitka, and we should all gather at Sheldon Jackson College and strip down to nothing but our boots and run through the street saying goodbye to the tourists,” Finkenbinder said.

She took the idea and, um, ran with it. Mostly.

Finkenbinder: “We didn’t strip down,” she said. “We did wild and crazy outfits instead, and so, here it is.”
KCAW: “Nobody had the courage to run naked?”
Finkenbinder: “They’ve gotten very close. Bikinis, flags, yeah.”
KCAW: “But nobody’s gone the full monty?”
Finkenbinder: “I don’t know how well that would go over here.”
KCAW: “And it’s cold.”
Finkenbinder: “And it’s … yeah, but sometimes it’s warm. Once in a while we have beautiful, sunny days. Oh! It sounds like they’re about ready to take off.”

And indeed they are. The runners have lined up in a parking lot, costumes flapping in the breeze and, with a countdown and the tossing of a boot, they’re off. 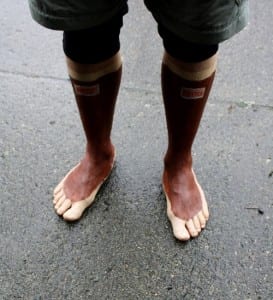 Sitka resident William The Giant ran Saturday’s Running of the Boots in his own version of Xtratufs, and won. Giant has been a barefoot runner for a while, but only on pavement for the last month or so. (Photo by Ed Ronco/KCAW)

Nobody’s running a stopwatch or anything – the Boston Marathon this is not – but it doesn’t take long for the first runner to come across the finish line.

His name is William The Giant. Really.

Giant is 5-foot-6 and his legs and feet are covered in beige and brown paint to look like the familiar Xtratuf boots. That’s because Giant ran the race barefoot.

Giant: “It doesn’t feel all that great.”
KCAW: “How long did it take you to get used to it?”
Giant: “I’ve been doing it for about a month to really run on pavement, but I mostly like to run on grass and on the tracks, because it’s really fun.”
KCAW: “Why?”
Giant: “Why?”
KCAW: “I think people are going to be listening to this going ‘Why?!’”
Giant: “Well, it builds a lot of calf and foot strength that you need for running, even in shoes. It feels great, like, out on the trails, but it’s hard to get strong enough for those trails without running on some other stuff first.”

The paint, by the way, was done by his partner, Tess Giant.

The Running of the Boots went off as scheduled this year, celebrating a tourism season that ended a little earlier than expected. The last two ships bound for Sitka, each carrying about 2,000 passengers, canceled their port calls. The culprit? Bad weather. That happens from time to time, thanks to Sitka’s geography on the outside of the Inside Passage. Forecasts for what was supposed to be Sitka’s last week of tourism called for seas near 20 feet.

But there’s not much talk of flagging visitor numbers or high seas today.

And she says the Running of the Boots is as much a celebration of Sitka’s full-time colorful characters as it is a farewell to the ones who come ashore for the day.