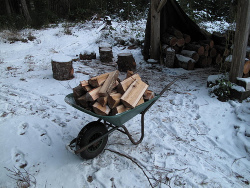 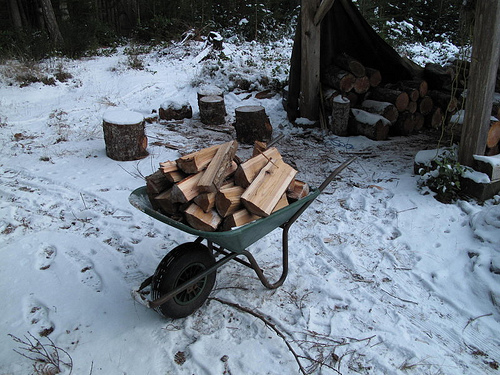 Wood energy is making a comeback in Sitka. With fuel prices approaching record highs, locals are returning to firewood, and to other forms of wood fuel lumped under the term “biomass.”

This Saturday (10-19-12), the Forest Service, the University of Alaska Cooperative Extension Service, and the Sitka Conservation Society are holding a “Wood Energy Fair” at the ANB Hall in Sitka, to re-introduce residents to wood heat in the home.
Listen to iFriendly audio.
When I first moved to Sitka, I had a wood stove – a Blaze Queen – that got so warm it would turn us right out of our living room, even on the coldest winter days.

Like hundreds of other Sitkans, I took advantage of low fuel prices in the mid-1990s — around $.65 per gallon – installed a modern oil stove, and turned out my Blaze Queen. Out the door, down the steps, and into the back of someone’s pickup truck. Cutting, hauling, splitting, and stacking firewood was a part of my past.

Now Marcel LaPerriere, president of the Sitka Conservation Society, would like to make it a part of my future. I asked him if much had changed about using firewood in the last twenty years.

“Probably the correct answer to that would be No.”

But LaPerriere says there’s an upside.

“I personally like burning with wood. It’s good exercise. The old saying Wood Heats You More Than Once is definitely true. I like going out and cutting wood, I like stacking wood, and – crazy as it sounds – I like hand-splitting all my wood. That’s my cardiovascular exercise. It’s cheaper than a gym membership, just as good for you, and you really feel like you’ve accomplished something.”

Despite being surrounded by forest, Sitka does not have large amounts of firewood available. LaPerriere purchased 20 cords of dry hemlock last year from Wrangell. Before the APC Pulp Mill closed in Sitka in 1993, residents salvaged a lot of firewood from beaches, after wood broke loose from the huge log rafts that towed right through town.

LaPerriere says regional sawmills might help plug this gap, but not with firewood.

“All the wood processors in Southeast Alaska – since the pulp mills closed – they primarily push their sawdust and wood scrap up into a pile and burn it outside. I mean, how crazy is that? When we could be making that into pellets, and burning those pellets to help heat our homes, and our commercial buildings.”

Only one mill in Southeast – in Ketchikan – is making pellets from wood waste. But the market is growing. The Sealaska office building in Juneau installed pellet boilers, and has been running them for some time. Now, the Coast Guard Air Station in Sitka has installed a pellet system, which is currently undergoing testing. Pellets for homeowners in Sitka have been available in relatively small quantities from local retailers.

One definite area of improvement in wood energy is the equipment itself. LaPerriere says there will be several wood stove retailers and contractors on hand at the fair to talk about some of the major advances in stove technology.

According to LaPerriere, the numbers are impressive.

LaPerriere says he pulls the catalytic converter out of his own woodstove two or three times a year and washes it in the kitchen sink. A fifteen-minute chore that makes a dramatic difference in the flue gasses from his stove.

LaPerriere and the Sitka Conservation Society consider woodstoves to be carbon-neutral, since the replacement trees absorb large amounts of carbon, especially in their first seventy-five years of growth. But there are other environmental organizations – most notably Greenpeace – who point to data suggesting that the carbon from wood-burning stays around far longer.

But what’s not in dispute is this: Sitka has reached the end of its hydro capacity, and was forced to turn on diesel generators last winter. The upcoming Blue Lake expansion project may take that hydro plant offline for up to a year. LaPerriere believes we could be paying a lot more for electricity in the interim.

“And I don’t know about the rest of you – I don’t mind putting on a sweater, but I don’t want to live in a 50-degree house, and to me it just makes a lot of sense to be burning a woodstove.”

The Wood Energy Fair runs from 10AM – 3PM this Saturday, October 20, at the ANB Hall in Sitka. Due to an accident during testing last week, tours of the pellet boiler system at Air Station Sitka planned during the fair have been cancelled.