Sitka students learn how to take apart an octopus 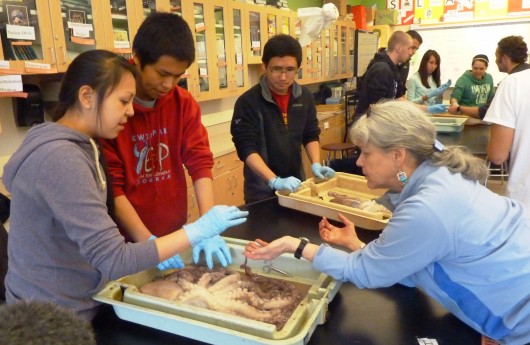 Mount Edgecumbe students work with a Science in the School volunteer during a class on octopus anatomy. All photos by Ed Schoenfeld.

Marine biologist Reid Brewer stands at the front of a Mount Edgecumbe classroom, dangling an octopus from his hands

“So what we’re going to do is to pass out some of these octopus. We’ve got enough to do an octopus for every two or three people,” Brewer says.

The students, from mostly rural Alaska and attending the state-run boarding high school, are about to take them apart.

“For dissection etiquette, don’t touch people with slimy hands. I would recommend against fixing your hair after we’ve started,” Brewer says. 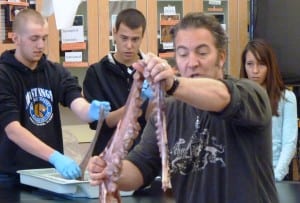 Some greet the slimy mollusks’ arrival with disgust, then curiosity and a little giggling.

Brewer holds up an eight-armed pacific octopus and the interactive lesson begins.

Brewer is usually based in Unalaska, working as an agent for the Alaska Marine Advisory Program.

But this particular week, he’s teaching students at Edgecumbe and other schools, as part of Sitka Whalefest’s Science in the Schools program.

“So I want you to look at the center part,” he tells the students. “Lift up the legs, where all the legs come together underneath it. And you should find a black, parrot-like beak. It’s right in the middle.” (Learn more about the giant pacific octopus.) 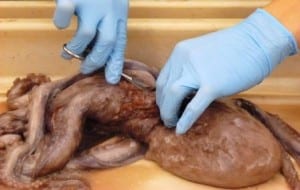 The students become focused as they locate, then remove, the beaks. With Brewer’s instructions, and program volunteers’ encouragement, they start searching for a variety of organs.

A few miles away, Sitka middle school students are learning how seals regulate body temperature – by dipping their faces into cold water. And high schoolers are being briefed about marine acoustics.

“We’re trying to bring in scientists who have cutting edge ideas and are good at working with students,” says Steve Lewis of Tenakee, Science in the Schools’ program coordinator.

“Part of my role is as an educator and a scientist to try to bridge that gap to help some of the scientists figure out some of the tricks to really integrating and making kids remember what they talked about and drawing them into the system,” he says.

Lewis says most students respond well, and it’s not hard to spot which ones are interested in marine biology. 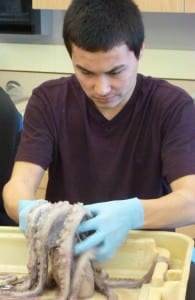 An Edgecumbe student gets ready to work on a small octopus.

He says Sitka students make a good audience, since many are from fishing families and have experience with ocean life. But he says Edgecumbe students seem the most interested in dissections.

“A lot of them are from Coastal communities around northern Alaska, and you can just see their eyes opening. They’ve done this before with hunting animals but they’re learning so much more about their physiology and what these organs that they were just pitching out as offal are doing for these animals and how it adapts them to their place in the ocean,” Lewis says.

Dissections – formally called necropsies – are difficult for some students. At least one lost her lunch during Brewer’s octopus class.

But Lewis says most get over it and do fine.

“Certainly you have some kids holding their noses. But usually once you get in there and things start to be interesting and you’re pulling lenses out of eyeballs and passing them around, all of a sudden they lose their fear,” he says.

Back in the classroom, Brewer instructs students as they cut into the octopus’ mantle, looking for internal organs.

“OK, so what I want you to do with the mantel is to turn it so the eyes are facing down and there’s a little slit back here and I want you to cut that slit,” he says.

Brewer circles the classroom, offering advice where it’s needed. He stops to help three students from Southeast and the Interior. 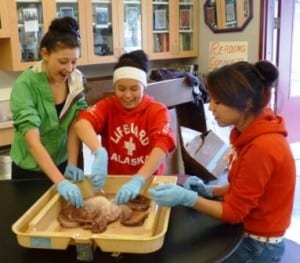 “You guys get it? Yeh. So once you that I want you to cut this way all the way and what we want to do is to peel the mantle back from the organs. Just use your fingers,” he says.

This is the fourth necropsy for Katie Wilmarth from Red Devil, Brittany Woods-Orrison from Rampart, and Natasha Kookesh from Angoon.

“We started with a crayfish and then we went to a frog. And then a rat. The rat was really gross. … This one’s the coolest one so far,” the students say.

Brewer continues around the room helping students locate and identify organs, explaining their functions as he goes.

Octopus sessions were offered to more than a dozen classes hosted by WhaleFest’s Science in the Schools program. It also organized another 60 sessions on other marine topics.

Coordinator Lewis says he’d like to add ocean acidification classes. And some day, he hopes to offer similar sessions in other Southeast communities. 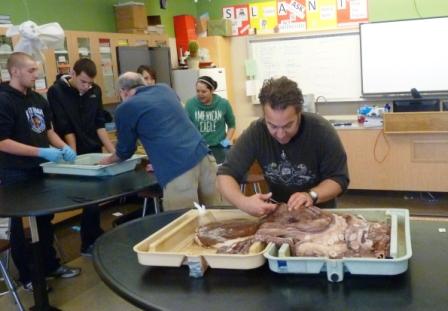