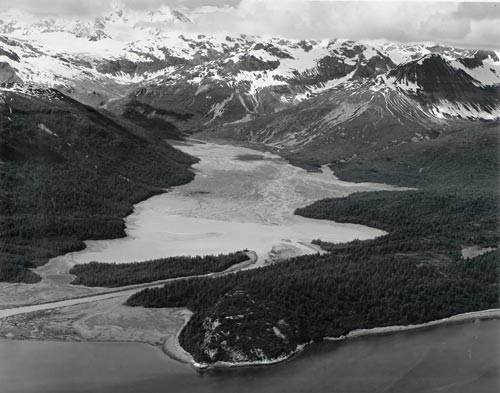 David Arnold took this 2006 aerial photo of the what used to be the Hugh Miller Glacier in Glacier Bay Park. A 1940s shot by pioneer photographer Bradford Washburn showed the glacier covering most of this valley. Scientists are studying glacial melt to determine its impacts on the bay’s ocean chemistry and the marine environment. Photo copyright David Arnold.

Scientists have known for years that greenhouse gasses are altering the chemical makeup of our oceans.

And it’s hitting harder in Alaska.

“We really have a unique environment that’s preconditioned to already be sensitive to ocean acidification,” says Jeremy Mathis, who directs the University of Alaska Fairbanks Ocean Acidification Research Center. 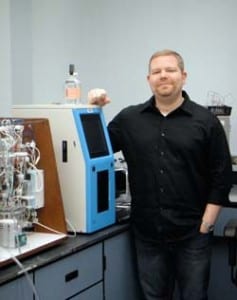 “Then, as more and more carbon dioxide is added into that environment, it pushes past a threshold where the waters can actually become corrosive,” he says.

While northern waters are of particular risk, scientists are trying to get a better handle on timing and location.

That’s why Mathis is researching changes in the waters of Glacier Bay National Park and Preserve.

“Glacial runoff, glacial meltwater has very low carbonate minerals, these minerals that the organisms are using the build their shells. And so if you dilute the surface water, if you melt a whole bunch of glaciers, all that water flows off the land and into the ocean,” he says.

The bay, in northern Southeast, was chosen because it’s a productive marine environment undergoing rapid change.

The three-year project has two more years to go.

“We go out and collect hundreds of water samples every month, up and down the bay. We stop every few miles, and we make these observations from the surface all the way to the bottom. And over time, we see the different impacts,” he says.

Mathis says what’s found in Glacier Bay will apply to other glaciated coastal areas. Research has already shown how rapid melting and warming waters are changing the Arctic.

Corrosive, acidic water can hurt shellfish the most. The degree of damage depends on the species, how it develops, and how deep it lives. (Scroll down to hear Mathis’ WhaleFest speech on ocean acidification.)

An oft-told example is a major die-off of tiny oysters – called spat – in Oregon and Washington nurseries and shellfish farms.

“They finally realized that what was going on was upwelling conditions along the coast and the intrusion of that … C02 into the water had pushed the water to a point where when they mixed it in and brought it into their facilities they were literally dissolving out their oyster spat,” he says.

Operators solved the problem by shutting off pipes bringing in sea water when upwellings made it too acidic. They recycled what was already in their systems until the water reached safer levels. 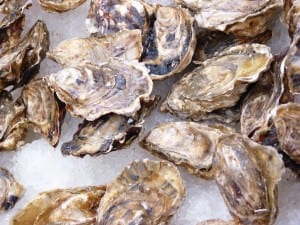 Farmed Yakutat oysters were on display during this year’s OysterFest in Juneau. Shellfish farms are threatened by increasing ocean acidification. Photo by Ed Schoenfeld.

Mathis says that’s not a long-term solution. Ocean acidification will reach a point where it can’t be avoided.

“We see those same conditions in the water here in the Gulf of Alaska that they see to the south off the West Coast. And it’s probably a little bit worse up here.”

That could damage Alaska’s growing oyster industry, with farms from Southcentral’s Homer to Southeast’s Prince of Wales Island.

But laboratory experiments show corrosive water changes salmon behavior, including feeding. It also affects the food chain fish depend on.

“The perfect example is the pink salmon that relies heavily on something called a terapod. And a terapod is just a tiny little snail that lives in the water. But it makes up about 50 percent of the juvenile pink salmon diet. And terapods look like a ground-zero species in terms of being impacted by ocean acidification,” Mathis says.

Researchers know such pH changes can damage coral reefs and increase the dangerous algae blooms known as red tides. Projects underway should define impacts to some other species.

Along with Glacier Bay, Mathis is involved in a state-funded ocean acidification monitoring system. One of its sites will be in Southeast. Buoys will be put into place next year.

Some have proposed geo-engineering the ocean by adding lime or other alkaline substances to counter acidification. Mathis says it just won’t work because the ocean is too large.

“There’s not really a mechanism for removing that carbon dioxide. All you can do is turn off the supply and then wait for what has already been introduced to slowly mix itself out,” he says.

That includes a recent private, unsanctioned effort off the coast of British Columbia. Iron was dumped into the ocean to fuel a phytoplankton bloom. That removed carbon dioxide from the air, but added it to the ocean.

Mathis says it was a stupid idea that just transferred the problem from the atmosphere to the sea.