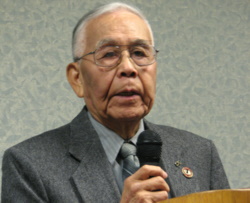 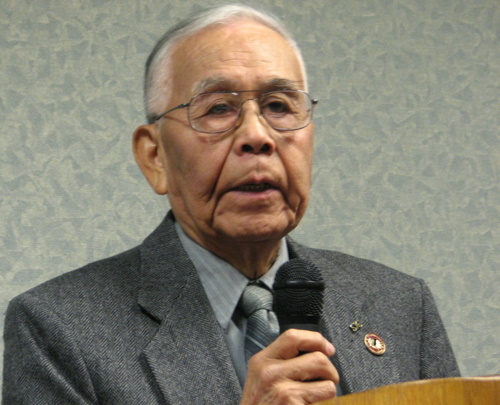 Gil Truitt, Mt. Edgecumbe ’48, told the Sitka Rotary that “the school was too good to close.” (KCAW photo/Robert Woolsey)

The phone book lists him as “Gilbert Truitt,” and that’s probably how he gets his mail and pays his bills, but to everyone else he’s known as “Mr. Mt. Edgecumbe.”

Gil Truitt spent thirty-four years at Mt. Edgecumbe High School in Sitka, as a teacher, coach, and principal – thirty-six if you count his two years as a student.

In celebration of Native American Heritage Month, Truitt spoke to the Sitka Rotary Club this week (11-20-12) about the history of the state-run boarding school – some of it the kind of history that you can read about in the library, and some of it much more personal.
Listen to iFriendly audio.
Truitt was born and raised in Sitka, but began his education at the now-defunct Wrangell Institute. In fact, he recalls the day when he was boarding a seine boat in the Wrangell harbor with the rest of his basketball team for a trip to Prince of Wales Island, when they saw three cars driving quickly down the highway toward them in a cloud of dust.

It was the superintendent of the Wrangell Institute, who told them that their school was closing, and they were being sent – immediately – to a new school in Sitka.

“While he was talking, the first plane landed, and seven boys who had come down in those three vehicles were put on the plane. They took off, and we were right behind them. One hour after we got here, February 22, 1947, every basketball team in Sitka came over and challenged us to basketball.”

That was the day Gil Truitt arrived at Mt. Edgecumbe, and except for his college studies and Master’s Degree work, he never left – not even after his official retirement in 1991.

Truitt told the Sitka Rotary that the success of the Mt. Edgecumbe alumni spoke to the success of the school, which was founded in the post-war era on discipline, courtesy, and respect. He also took pains to defend the boarding school culture – at the Wrangell Institute, Mt. Edgecumbe, and Sheldon Jackson — which he said focused on preparing students for the future, and was not about suppressing Native culture.

“At no time were we ever told, Do not speak your Native language, never.”

“These were not popular courses, because students at those schools were there for a purpose, just as they are at Mt. Edgecumbe today for a purpose. They want the best education possible. So they fill up their course schedules with courses that they know will eventually help them when they leave Mt. Edgecumbe.”

Mt. Edgecumbe was opened by the Bureau of Indian Affairs in 1947, and graduated its first class – including Truitt — the following year. Truitt says that was the beginning of a “golden era” at the school, but it was not to last. The BIA eventually decided to close Mt. Edgecumbe in 1982.

“We had a man running for the US Senate, and he said, If I am elected, I’ll do whatever I can to reopen the school when it closes. And he pulled out a letter from a student pleading with him to help. It was going to close in 1982, but he was successful and talked to the government, to leave it open for one more year, 1983. It was Sen. Frank Murkowski. We tried to talk to other politicians, but they wouldn’t listen to us. He was the only one who sat down with the student body and talked to them. He kept his word.”

Even when the BIA did shutter the school in 1983, Truitt says he knew it would not be closed for long.

“And when the school closed it was sad, but I was not one of those who was sad. I thought, The school is too good to keep closed. But also, I knew we had the huge alumni statewide, and they flooded the state legislators with letters to reopen the school. It reopened September 30, 1985.”

During questions and answers, Truitt alluded to – but did not directly comment on – tensions between the community of Sitka and Mt. Edgecumbe while it was in the hands of the Bureau of Indian Affairs. He simply referred to 1985 as the beginning of a new era – one that he has positive feelings for.

“And I think the community learned how important economically the school is. It’s totally different today. I appreciate seeing the two schools doing things together, and getting along much better than in the past.”

Truitt says Mt. Edgecumbe may be due for another reunion. The last one was in 1997, on the fiftieth anniversary of the school. Over 600 alums turned out – housing them all was a challenge. Truitt used the occasion to survey alums about their Mt. Edgecumbe experience. He reports that the family spirit of the school remains a strong memory, right behind dorm life, and basketball.