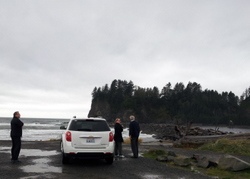 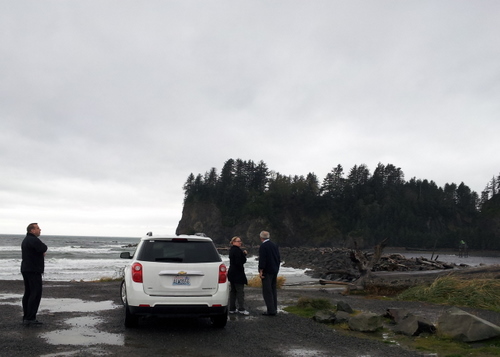 Members of Lt. Lance Leone’s legal team survey the scene of the crash. They’re looking out at James Island, and standing underneath the location of the power lines that caused the crash. (Photo provided by Leone)

When Coast Guard helicopter 6017 crashed in 2010 on its way to Sitka, co-pilot Lt. Lance Leone was the only member of the four-person crew to survive.

This week we’ve been bringing you a three part interview with Leone.

This third and final part begins in a Seattle hospital, where Leone was recovering from a broken collarbone and other injuries in the days after the crash.

Leone was recorded at the studios of Texas Public Radio in San Antonio. This interview was conducted Nov. 12.

LEONE: They told me no one else survived and from that moment on I had to ask continuously: “Why, why, why?” It was immensely troubling. And as I’ve talked to soldiers who have been coming back from Iraq and Afghanistan about this same issue, it affects them as well when their platoon, when their group is hurt, and they say “Why not me? Why didn’t it happen to me?” I don’t know the right answer to how you heal the brain, but it’s definitely slower than the physical side.

KCAW: Was the memorial service a helpful experience for you?

LEONE: It was exhausting for me, mentally and physically. My arms still barely worked but everyone from the town and everyone at the Air Station and everyone that had come to the memorial service was hugging me and I couldn’t be limp and not hug back. So I was hugging as many people as would hug me. I would hug back. I was exhausted. Mentally, I think I was more of a robot. I didn’t know how much I was supposed to cry. I didn’t know if I was supposed to cry. Not crying would be seen as I was too stern. It was very difficult mentally, because obviously all I wanted to do was curl up into a ball and cry and cry that Sean, specifically, wasn’t there anymore. I’d known him since 1999. I’d known him since I’d shown up at the Academy. I’d known him most of my adult life. And to have him be the one I was flying with, that didn’t come up to the surface was very trying. The amount that I’d known about Adam and Brett, just having met them, about their families and about their struggles and their hardships and the things that they love – I had to be there to memorialize them. It was very hard. It was hard, but it needed to happen.

KCAW: Do you keep in touch with any of the families today?

LEONE: Absolutely. I attempt to talk to them as often as I can without being bothersome. More than anything it’s, for me, I feel like I want to know how their life is going. How are the children – the seven children that are left behind, how are they doing, is there anything I can do to help?

KCAW: When you found out there were charges, how did you find out?

LEONE: It was a slow process. I was six days from starting flying again in Mobile, Alabama. I was in Washington, D.C. My wife, Ellen, had loaded up our two children at the time, packed everything up and was going to fly down to Pensacola to stay with friends, and Mobile to stay with friends, while I went through the requalification course. We had plans. We had plane tickets. And then I was told while I was in D.C. that I couldn’t attend the training.

KCAW: How were you ultimately informed of the charges? Did you get called into an office?

LEONE: I was sitting there and I got a phone call from now-Capt. (Doug) Cameron, and I said “Sir, I’m at the health fair, can I wait until noon?” and he said, “No, come back right now.”

Cameron, the Air Station’s commanding officer, informed Leone of the charges: Destruction of government property for the loss of the helicopter. Neglecting his duties as navigator, by not avoiding the wires. And the military equivalent of negligent homicide for the deaths of the two crewmen aboard – Hoke and Banks.

LEONE: I had formally been read those exact same charges during the (administrative) investigation, but promised they were just normal. We have to always read you your rights before doing an investigation. So I’d seen those charges before. I’d seen the negligent homicide. I’d seen the dereliction of duty. But to see it actually charged against me, all I could do is sit with my lower jaw gasping.

KCAW: This is in then-Cmdr. Cameron’s office?

LEONE: Correct. And I asked him “What’s next, what do we do next?” And he said, “Well, because of the severity of the charges, you’ll be taken to an Article 32,” and he was extremely professional.

An Article 32 hearing is similar to a grand jury proceeding in civilian court. A military evaluator hears evidence and decides whether there’s merit to proceed to a court martial. Leone’s hearing took place in Juneau in December. The Coast Guard said the helicopter was going too fast and that Leone fell short of his duties as navigator. Leone’s attorneys argued the Coast Guard should’ve already removed the wires the chopper hit, because they’d been implicated in two other accidents. As the arguments went back and forth, Leone sat inside the courtroom and listened. But outside the courtroom, he tried not to think about it.

LEONE: My family’s unbelievable. My wife, my dad, my mom, stepmother, all my family. And then the Sitka family that came over on the ferry with me. How did I occupy my time without the trial? Not talking about the trial. … The first day of testimony was so incredibly trying on my soul, being told of everything I did wrong. 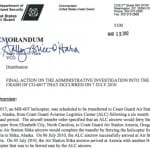 The Coast Guard dropped all charges against Leone, but issued what’s called a “Final Action Memorandum” on the accident. It said Leone directly contributed to the deaths of those on board. And it said he should have been more vocal in challenging Krueger, the pilot in command, when he made a low pass over a Coast Guard boat below.

In a memo of his own, Leone says the black box voice recordings from the accident don’t tell the whole story, and that he challenged Kruger using a method taught to him by the Coast Guard. He calls it “floating a trial balloon.” 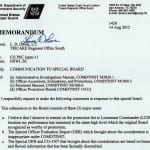 LEONE: You say things like “We might not have much radio communications this low,” or “There sure are a lot of bald eagles or birds down this low.” You say stuff like that so they pick up on your discomfort, but you allow them to then make a decision without you having to challenge their authority for the sole purpose of saying that you’re uncomfortable.

Truth be told, when I first showed up in Sitka, I was very uncomfortable because it was different. I’d never flown below terrain. That’s something that I believe anyone that shows up in Alaska that flies below mountain ridges, when you can’t even see the top of the mountain – it’s very different than any flying I’d done before. I used this the whole time I’d been at Sitka for those first couple weeks to gently say I was uncomfortable without being the outcast of “Oh, this guy’s never going to be able to be an aircraft commander. He’s afraid when we even fly through Whale Bay/Gut Bay.” Instead of being afraid, or being concerned openly, I say “Wow, how would we turn around if we had a problem here?” It’s floating a trial balloon that would get across the point that I’m uncomfortable, but I don’t want to challenge the authority of the aircraft commander.

KCAW: Kind of like “Boy, we’re going really fast,” when you’re in a car.

LEONE: Yeah, or like, “I hope there’s not any cops around.” Yes. “Boy we’re going pretty fast. Wow, I didn’t know the car could go this fast,” instead of saying “Slow down you incompetent driver! I’m going to drive!” That’s the spectrum “clear, bold and concise” can take, you know?

With the Coast Guard’s report came an admonishment from Rear Admiral Thomas Ostebo, the Coast Guard’s commander in Alaska. Leone was transferred to a desk job in San Antonio, Texas. He’s now a Coast Guard liaison to Tricare, the military’s health insurance arm.

And he’s awaiting word about promotion. His lawyer, John Smith, says the promotion is facing extra, unnecessary scrutiny. A Coast Guard board met this month and made a recommendation. That stays secret and heads to Adm. Robert Papp, the Coast Guard’s commandant, in Washington, D.C.

LEONE: They will decide the fate of my Coast Guard career. The fate of me flying again. After the second AEB met and said I could fly again, I didn’t really think there was a way to not fly again. But then I started realizing that if I didn’t make lieutenant commander, I would see out the rest of my time in the Coast Guard here in San Antonio.

If Admiral Papp allows the promotion to move ahead, Leone will become a lieutenant commander and receive back pay to August 1, the date the promotion was scheduled to take effect. If Papp takes Leone off the promotion list, the matter moves to the desk of Homeland Security secretary Janet Napolitano.

KCAW: How has everything that’s happened, from July 7, up until this current situation, how has this shaped the way you feel about the Coast Guard?

KCAW: I think people hear that and think, “How can he still like the Coast Guard after all of this?”

LEONE: The amazing part is that it’s not the entire Coast Guard. I have gotten so much more support than any of the negative stuff. It’s a question that’s hard for me to answer. I will continue pressing for what I believe is right, and I will not compromise my honor, respect or devotion to duty, like I’ve been taught. I will do what I believe is right for the Coast Guard, and I believe what’s right is to go through this and see the process to finality.

A decision on his promotion to lieutenant commander is not expected until January.