Young & impressionable: The effect of domestic violence on children 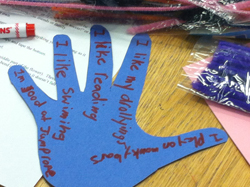 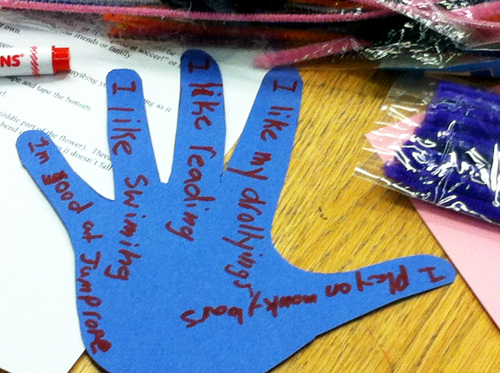 Children’s brains are like sponges. They soak up languages and absorb impressions of the world. But this also means their minds retain bad experiences, like domestic violence. Prevention programs in Sitka are working with young kids to give them the tools they need to process feelings and become more resilient.

In part one of a two-part series, KCAW’s Anne Brice explores programs that aim to create personal connections through group activities.

Under Alaska Law, a child’s exposure to violence in the home is considered a “mental injury.” The damage it causes can be severe and persistent, even changing the way a young brain develops.

“It really reverts you back to the more primitive parts of the brain,” said Elena Gustafson, the Youth Outreach Coordinator at the local women’s shelter, Sitkans Against Family Violence, or SAFV. “It keeps you in that fight or flight response.”

She says children internalize violence in the home, whether they witness it or not. “Even though they don’t see things directly, they feel that tension and they really embody it.”

For nearly a decade, SAFV has been a recipient of a federal grant through the CDC to support primary prevention of intimate partner violence within the community. Gustafson runs a program at SAFV that uses art. 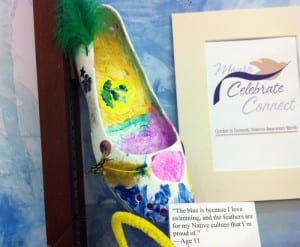 One art project that Gustafson facilitated is called, “Take A Walk In My Shoes,” where women and children decorated shoes to express emotions and show others what it means to be them. “Really what you’re seeing is a bunch of little glimpses into different people’s lives,” said Gustafson. Photo by Anne Brice/KCAW.

“A lot of these art projects are one, to identify feelings, which is very important because they need to be able to recognize those to know how to process anger and sadness, and how to really incorporate into themselves, feelings of joy and pride.”

For kids, Gustafson says sometimes healing is as simple as kids just saying what’s important to them. “These are still kids who care about what their favorite color is or talk about that they like to jump rope, things like that. We need to celebrate that.”

Alaska has one of the highest domestic violence rates in the nation. Nearly half of Alaska’s women have experienced intimate partner violence in their lifetime. That puts the state third, behind Oklahoma and Nevada, but well above the national average of about 36 percent.

“Kids who have experienced trauma often tend to be very withdrawn or very hyperactive and agitated. They really don’t see how their actions are connected with the outside world to the point of, you know, causing violence to other people and not understanding that it was wrong.” 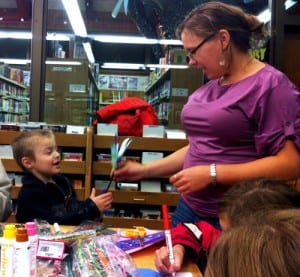 A little boy shows Gustafson an art project he finished — a traced cutout of his own hand with different things he likes to do written on each finger. Gustafson says positive adult support and creative expression help children work through complicated feelings. Photo by Anne Brice/KCAW.

But she says blaming or punishing kids for misbehaving isn’t the answer. “You can’t just label a child a trouble kid. And say, oh, there’s not going to be any hope for them, right? Or they’re just a bad kid, so we’re going to punish them. You can’t do that. Often, those kids are the ones who need more positive reinforcement, more support.”

Brian Sparks, who works at SAFV as a domestic violence prevention specialist, echoes the sentiment. “We all are born good. There’s not one baby in the world where we go, oh, that’s a bad baby. Forget it. Just write that baby off.”

“And somehow, 18 years later, they’re not good anymore. So, what happened? What’s messed up about the system? And so, we’re just trying to find out what’s messed up and correct that.”

Sparks coordinates a local branch of the national program called Girls on the Run. It’s an after-school program for third to fifth grade girls.

The program will be in its fifth year this Spring at Keet Gooshi Heen Elementary School. “The activity, which is going to involve running somehow, like maybe running to the other end of the gym, telling a girl something they like about that girl, and then running back. Just doing that over and over again.”

He says prevention programs are important for every person, regardless of age or gender, but there are certain benefits to starting young.

“Certainly younger people are more ready for some knowledge than they would be at another age. Middle school’s a time when they want to their peer group more than they want to listen to adults. But in third grade, the girls are really proud that they’re wearing the same t-shirt as their coach. They love it! It’s the best thing in the world to them! They get to talk about not gossiping and…oh, they love it. It’s fantastic. But imagine that in 8th grade. No way.”

The hope is that these girls will pass their knowledge along to other peers, and bring it with them into adulthood.

“They spread these lessons, let’s say the not gossiping lesson. Well, okay, so now if somebody who’s not in Girls on the Run starts to gossip, there’s a critical mass of girls who have attended Girls on the Run who don’t accept that behavior anymore. It’s a program that I think really creates resiliency within the girls individually, and also within peer groups and within the community. It’s just brings people together. And that creates resiliency.”