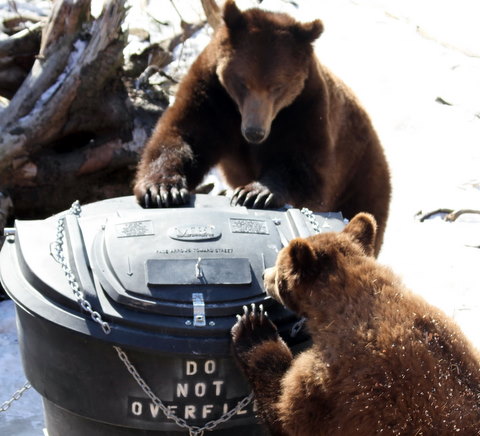 Sitka police could get tougher on trash under a measure advanced last night by the Assembly. City law right now says residents must wait until their designated trash pick-up day before they put smelly garbage outside. But the days of a friendly warning for violators might soon be over.

In the city code books, it’s called putrescible waste. You know it as those dinner scraps from three nights ago, or that tub of who-knows-what you finally removed from the fridge, or even dirty diapers.

Bears call it dinner. Sitka’s neighborhoods are like all-night buffets for bears, and have been for a long time — more than 25 years, says Phil Mooney, area wildlife biologist for the Alaska Dept. of Fish & Game.

“The problem really hasn’t been resolved,” he said. “It’s a people issue more than a bear issue.”

So, the city wants to tighten the rules. Instead of a warning on the first offense, residents who toss out their smelly trash too early could get a $100 fine. Do it again, and it goes up to $300.

“They’re looking after one another,” he said. “These people are getting very frustrated. In fact, we fielded way more calls from residents who are saying ‘We’ve got 10 people in the neighborhood, nine people are taking care of their garbage, the bear is coming in and hitting No. 10, and hitting it repeatedly, and as a result of that, the bear is coming in and knocking over the other nine cans.”

Besides giving police the ability to get tougher sooner on garbage that can attract bears, the group also hopes some projects around town will help address the problem.

The Indian River neighborhood is one of the busiest places in Sitka for bear activity. That’s because it’s right next to a salmon-heavy river and dense forest. The neighborhood is managed by the Baranof Island Housing Authority, or BIHA. The organization installed five 350-gallon dumpsters to replace individual cans for the homes along Andrew Hope Street.

In other parts of the neighborhood, it added 350-gallon cans and secured them to the ground. BIHA staff unlatch the cans on the morning of pickup.

“Our calls went way down there this year,” Schmitt said. “I don’t know if it’s a direct result of the cans, but I think it is.”

Schmitt was peppered with questions from the Assembly, including how many tickets the department has written. He said about a dozen this year, but that he didn’t have the number right in front of him.

Assembly member Mike Reif wondered about homes and businesses downtown. Bears don’t often come into Sitka’s core, although it’s not unheard of. Still, Reif said, what about people in dense neighborhoods without sheds to secure their trash cans? Or commercial buildings that have cans outside?

“We don’t anticipate going around writing tickets for all those,” Schmitt replied. “We’ve been reactive in nature. We get a call of a bear in a neighborhood. We see that he’s been attracted by garbage. And that’s when we’re actively looking to do enforcement. Education and enforcement.”

The changes to the trash ordinance will require another reading before the Assembly. They would go into effect 30 days after getting final approval.