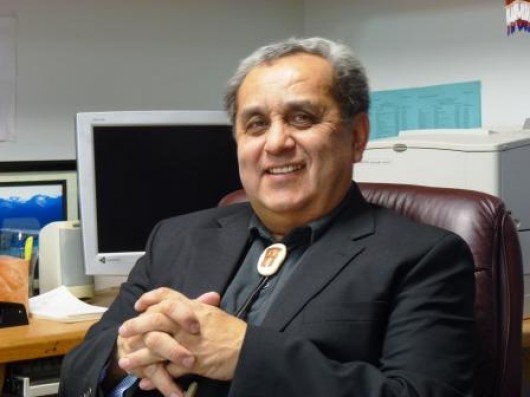 Most Decembers, Albert Kookesh is making plans to move to Juneau for the legislative session.

But this year, he’s spending more time at his Angoon home, enjoying the view.

“I see really calm waters because it’s high tide right now. And all of the beaches and all of the woods are covered with snow. And so is my dock right in front of my little house here,” he says.

Democrat Kookesh lost his Senate seat to fellow incumbent and Sitka Republican Bert Stedman in the November general election. The two became opponents when parts of their separate Southeast districts were combined.

The new district has less than a third of Kookesh’s old constituents, dropping communities in the Interior and Prince William Sound. Stedman kept more than two-thirds of his old district, including two of the region’s three largest communities. 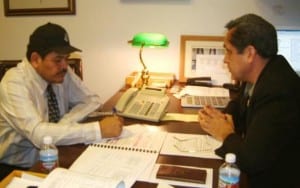 “I wasn’t surprised. I thought if we worked very hard we could pull a little bit of an upset here, but that wasn’t to be. People knew Stedman in his old district and they voted for him,” Kookesh says.

Out of office, 64-year-old will remain busy. He’s chairman of the Sealaska regional Native corporation’s board of directors. He also co-chairs the Alaska Federation of Natives board.

“So I’m not going to be sitting around not doing anything. I’m going to be pretty busy, in fact. I’m even contemplating getting back into commercial fishing,” he says.

“Albert’s going to be a definite loss,” says Kim Metcalfe of Juneau, a Democratic Party leader who has been active in the Alaska Native Sisterhood.

“He’s a very powerful guy with the positions he holds with both Sealaska and AFN. So, he’s not going to go away. He’s going to be around for a long time and use his speaking skills.
He’s a powerful speaker and I think we’re going to hear a lot more from him,” Metcalfe says.

She says Kookesh has been a strong advocate for education — statewide and in the villages he represented. She also says he used his leadership and oratory skills to urge young Natives, as well as others, to attend college.

Kookesh and Sitka’s Stedman worked together in the Senate’s bipartisan majority. Their race was largely respectful, and Kookesh continues speaking in positive terms.

“I think he’s going to do a good job for our district. I’m just a little disappointed that they weren’t able to put the coalition back together where he could have been the co-chairman of Finance again, or something more,” he says.

Kookesh headed up the Transportation Committee, while Stedman assembled the capital budget as co-chairman of the Finance Committee. But this election’s Republican gains broke up the bipartisan majority. And the new leadership shut him out of budgeting.

Instead, Stedman was offered chairmanship of the Health, Education and Social Services Committee. He accepted, saying he looked forward to an opportunity to broaden his horizons.

“I don’t really think he’s cut out for HESS. But maybe we’ll see something different out of him. I think he’s more of a numbers man. He’s very powerful in that area and he has a very good background in it. Finance is right up his alley,” he says.

Kookesh has been active in the Alaska Native Brotherhood, serving as regional president and secretary. He played Gold Medal basketball, a major Southeast competition, for three decades.

But it hasn’t always been a smooth ride.

He’s a regular target of Sealaska shareholders critical of the corporation. And he earned an ethics violation for comments some took as threatening the city of Craig to gain support of the corporation’s land-claims legislation.

He was also among those cited for overfishing subsistence sockeyes near Angoon. His case was dismissed.

Despite all that, he says he still has a role to play.

“My name is well-enough known that I can still be a little bit of a force in Alaska. If it’s through the Native community, that’s fine. If it’s through some other venue, I’d be glad to look at whatever comes down the pike. Maybe we’ll have a Democratic governor in the next election and I could be involved in that somehow,” he says.

Technically, the Angoon Democrat remains a senator until the next Legislature gavels in January 15th. But there’s little to do before then.