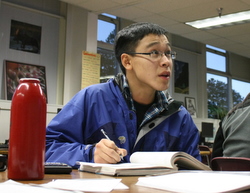 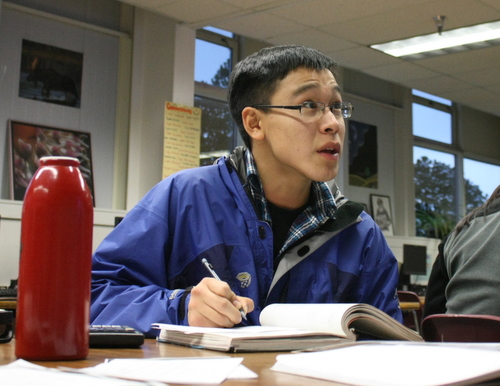 The snow is coming later in Kipnuk. The river doesn’t stay frozen all winter. And the riverbank is quickly eroding. Those are just a few of the changes 18-year-old Nelson Kanuk says he sees in his western Alaska hometown.

“My house back in Kipnuk, we live right in front of the river bank,” he said. 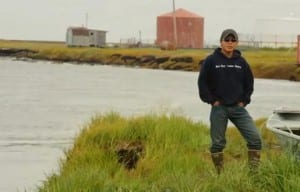 Nelson Kanuk stands on the river bank near his home, in this screen shot from a short documentary about his life in Kipnuk. Click the photo to view the eight-minute film. (Photo from YouTube)

The permafrost that used to hold the bank in place is melting. He’s watched the Kugkaktlik River move closer and closer to the bright green house he shares with his parents and five siblings. He and his father, William, have taken measurements.

“In the springtime we lost about eight feet, and not too far after that in the summertime, we lost about five feet,” Kanuk said. “Now, I’m not sure how much closer it has been because I’ve been here at school in Sitka.”

Nelson sits at a table inside Tom Hart’s trigonometry classroom at Mt. Edgecumbe High School. He’s like a lot of the other students at the state-run boarding school – away from home, pushing through rigorous coursework, and today, trying with his peers to understand the law of cosines.

You wouldn’t know he’s waiting for his case to be heard by the Alaska Supreme Court.

“All we’re asking is for the government to take action to protect our future by creating a recovery climate plan, to hopefully reduce the carbon emissions in our future,” Kanuk said.

Kanuk is one of six Alaska youth being represented in court by the organization Our Children’s Trust. The Oregon-based nonprofit filed lawsuits on behalf of young plaintiffs in nine states. A separate suit is pending against the federal government, and there are a few international cases, too. The lawsuits ask their respective governments to consider the atmosphere a public trust, and to exercise their duty to protect it.

“Unfortunately, he is the perfect plaintiff,” DeNoble said. “Where Nelson lives in Kipnuk, the tundra and the ocean is, as he has described it, basically their supermarket. From a gathering of food, to a culture, to a way of life, climate change is significantly and severely impacting that.” 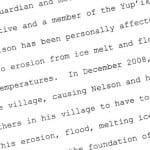 PDF: Click the image above to view the original 2011 complaint filed by Kanuk and the other plaintiffs.

The original Alaska suit was filed in 2011, but dismissed earlier this year in Anchorage Superior Court. Judge Sen Tan essentially ruled climate policy is not an issue for the courts, but for the political process – the legislature and the executive branch.

In appeal papers filed with the Supreme Court in November, De Noble says his clients didn’t ask the court to set a specific policy, but rather to tell the state it has a responsibility to do something.

The Our Children’s Trust lawsuit is against the Alaska Department of Natural Resources. But it was Department of Environmental Conservation Commissioner Larry Hartig who returned KCAW’s phone call. He said he couldn’t speak directly to the lawsuit, but that Alaska has taken steps to address climate change, and continues to do so.

As for reducing emissions by 6 percent a year, as the Our Children’s Trust group recommends? Hartig said making a dent that big would probably mean massive changes to oil and gas production, as well as air and marine travel. And much of that – like the kinds of fuel airliners can use – is out of the state’s control.

Reducing greenhouse gas emissions into the future is important, Hartig said. But even if that happens, what’s already been done will continue to have consequences.

Back in Sitka, Nelson Kanuk hopes adaptation doesn’t mean his family will have to move.