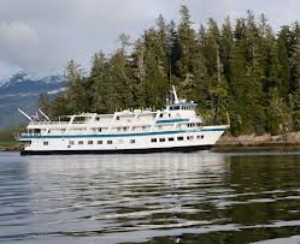 An Allen Marine tour ship rounds a point just off of Sitka Sound, pointing out the sights to a lively group of cruise-ship tourists. It’s a wildlife cruise, and the captain has no trouble finding sea otters.

“You can see the little pup right on mom’s stomach,” he says, keeping far enough away to not disturb the pair. “She keeps looking back at us and is kind of like doing the backstroke there.”

It’s one of thousands of tours the company has made since 1970. What started as a branch of a boat-building business has become a major player in Alaska’s day-cruise market, with ships based in Ketchikan, Juneau and its home town.

About three years ago, the Tlingit-family-owned company decided to expand into a new market. It created Alaskan Dream Cruises, sailing two ships on multi-day voyages starting in 2011.

This summer, it will add a third vessel, the 62-passenger Baranof Dream, on longer trips.

“It’s been built to slow the itinerary down and just enjoy the scenery,” says Michael Wien,  vice president of sales and marketing for Alaskan Dream Cruises.

“We want to make sure that we build in these additional days to enjoy the marine life that might be in the vicinity or a spectacular scenic day and general interests of the guests,” he says.

The new, 11-day itinerary will call on Petersburg, Kake, Skagway, Haines and Juneau. It will also include Glacier Bay, Tracy Arm, Hobart Bay and a couple “captain’s choice” stops.

Alaskan Dream is one of about six small cruise companies operating in Southeast. They offerings include yachts carrying a dozen passengers to a replica Victorian-style steamship with a capacity closer to 100.

“I think those smaller cruises are so very important to those smaller communities,” says Shelly Wright, executive director of the Southeast Conference, an organization of regional leaders that promotes economic development.

“Having those boats with even 10-12 people on them is huge for those communities. They get to showcase their art and their culture and I think the people traveling on those cruises, that’s what they’re expecting,” she says.

Several, including Sitka’s Alaskan Dream line, are trying to fill the gap left when Cruise West went out of business two years ago. The Seattle-based company had been a major player in the international small-cruise market.

Some of its ships were sold to other small lines. Wien, of Alaskan Dream, says that’s where its newest vessel comes from.

“It’s formerly the Spirit of Alaska, built for 78 guests. And we’ve brought down the capacity, which allows for more personal space and enjoyment of really a great vessel, in pursuing the area around Southeast Alaska,” Wien says.

“We’re kind of a smaller town and it’s hard for the large ships to get in here,” says Dave Berg, of the town’s Viking Travel, which offers tours to small-ship passengers.

He says lines like Alaskan Dream are welcome in his community, while big ships are not.

“And that certainly causes a lot of angst amongst individuals in town who like to keep Petersburg as a small community as it is – without attracting large ships,” Berg says.

He says the new ship will be able to tie up near downtown, within walking distance of Petersburg’s city center.

Some sail from Seattle, while others operate only within the region.

Their low passenger numbers mean higher fares. Wien says berths on the new Baranof Dream will start at about $2,700.

“We’re anticipating raising rates as the demand continues and as the economy slowly improves. Rates vary depending on the size of the cabin and could go up to $8,000 per person on some of the longer cruises,” Wien says.

This summer’s jump from two to three ships is part of Alaskan Dream Cruises’ long-term business plan. It means sailings will increase from 31 to 43.

No more ships are expected to join the fleet, at least for now. But Wien says new itineraries will be offered.