Electronic monitoring requires an initial investment for the equipment, which could be a boon to local businesses. (source: ALFA)

A major gear group is pushing back against rules set to take effect this January that will put human observers aboard some smaller fishing boats. The Alaska Longline Fishermen’s Association has enlisted the help of the state’s congressional delegation to try and delay implementation of the observer program for small boats, and to adopt a more efficient electronic monitoring program instead.
Listen to iFriendly audio.
The fisheries that take place in federal waters off of Alaska’s coast have had on-board human monitors for years. The monitors provide critical data on the number and species of fish coming over the rail, and are particularly important in counting bycatch – king salmon and halibut, for example, which are caught unintentionally by large trawlers dragging their nets for pollock.

The North Pacific Fisheries Management Council voted to restructure the observer program two years ago, so fishermen have known that the halibut fleet and boats under 57-and-a-half feet would be included beginning in 2013. Boats under 40 feet will be included a year after that.

That’s a lot of boats – about 1,300 – which don’t have a lot of room to spare for an extra person. The Alaska Longline Fishermen’s Association has spent the past couple of years developing an alternative to an observer’s eyes.

Linda Behnken is the executive director of ALFA.

“A camera, which is what electronic monitoring involves, is hooked up on a boat. When you start hauling gear, the camera turns on automatically, and it doesn’t care about weather, it doesn’t have to be fed, doesn’t have to be put up in a hotel, flown into towns, it just gets the data the agency needed.” 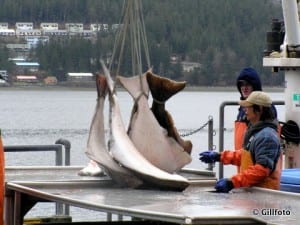 With funding from the National Fish and Wildlife Association, ALFA developed a pilot project to test the effectiveness of electronic monitoring on small boats in both Homer and Sitka. Data analysts could successfully identify around 95-percent of the fish landed on the test boats. The daily cost of electronic monitoring was roughly half that of a human observer.

Behnken says they’ve even accounted for the possibility that someone might try and game the system.

“What we had always intended from the start was if someone purposely obstructs the view of the camera on the boat, stands in front of it, don’t wipe the lens – if it gets splattered so the picture’s not good – then your next trip you’re going to get a human observer. So, in a way, the human is the stick and the electronic monitoring – to our view – is the carrot.”

Despite the promising results from the 10 boats in the study, NOAA Fisheries this fall announced that it would be moving ahead with restructuring the observer program using its human model, beginning January 1. ALFA sought – and received – the help of Alaska’s congressional delegation. Senators Lisa Murkowski and Mark Begich, and Representative Don Young all signed a letter on December 10 to Rebecca Blank, Acting Secretary of Commerce, asking NOAA to hold off on deploying human observers on the small boat fleet until “an option for Electronic Monitoring (EM) is possible.”

All other aspects of the restructuring should move forward, including the 1.25-percent assessment on the fleet to pay for the program.

“We understood that the sablefish/longline fleet would be paying the lion’s share of the cost of this program. We’re paying 67-percent of the costs. And we were hesitant, but willing to shoulder that burden if we could get two things: 1) Better coverage. We have a lot of concerns about salmon and halibut bycatch. And 2) A program that worked for the small boat fleet – namely, electronic monitoring. At this point we’re still shouldering that big lion’s share of the costs, but to our mind we haven’t achieved either of those two goals.”

Behnken says that because electronic monitoring seemed a likely course of action, the full costs of a human observer program were never fully assessed for the small boat fleet. And while this could be grounds for future litigation on the issue, she thinks there is an even stronger environmental case that observer coverage under the proposed restructuring plan is insufficient to protect stocks of halibut and black cod.