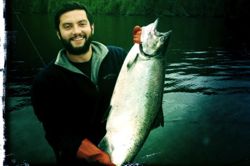 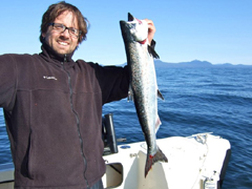 A college professor who studies food systems is putting his money where his brain is. Nic Mink has spent the past two summers in Sitka meeting fishermen and learning about the economy salmon trolling. Now, he’s launched a business to connect individual boats with consumers in the Midwest.

You know your business is on the map when you make the local television news in the Quad Cities. Nic Mink is a sustainable foods fellow at Butler University. He says he started Sitka Salmon Shares trying to answer a question many of us have asked:

“Why does this salmon taste so good here, and taste so bad down in the Midwest?”

Mink first came to Sitka in the summer of 2010 with his girlfriend, who had a full time job. He rented an office on the Sheldon Jackson campus to finish his dissertation. Then, he received an appointment in the Environmental Studies Department at Knox College, in Galesburg, Illinois.

Besides the college, Galesburg has a sustainable business incubator. And it could not be better situated.

“Galesburg is this perfectly, centrally located place. About three hours from everywhere in the midwest. When you start to think about developing markets in Chicago, Indianapolis, St. Louis, and Des Moines, and Iowa City, and Madison, and Milwaukee – Galesburg acts as the center of the salmon solar system that we plan to set up with our Sitka fish.”

For three months last summer, Mink and seven employees packed and delivered frozen salmon in 5-, 8-, and 12-pound boxes to 350 clients in the Midwest. The coho and king salmon was provided by two boats in Sitka; the sockeye came from three Juneau fishing businesses; and Seafood Producers Cooperative in Sitka supplied whatever inventory the others couldn’t.

“My husband and I have a garden, and he’s a hunter. So we love good food. We priced it out and figured it was about the price we’d pay for really good salmon in town, and we figured, Might as well try it.” 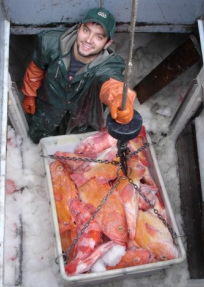 Severt says she and her husband both already love salmon, which made the decision to become a member that much easier. She also understands the idea behind CSA’s – community-supported agriculture – even though her garden makes joining a CSA unnecessary. Sitka Salmon Shares is a type of community-supported fishery. Severt says knowing who caught the fish, how it was caught and cared for, were all as important in her decision to buy in as making a healthy eating choice.

Now, even though she lives three-thousand miles from Sitka, she’s starting to sound like a local.

“And it’s been fun having a freezer full of salmon. Oh, we’ll have salmon tonight, and tomorrow, and the next day!”

One factor Severt did not roll into her decision was the sustainability of having fresh-frozen fish flown from Sitka to Chicago, trucked to Galesburg, and then hand-delivered to her door in Madison.

Nic Mink, however, thinks about this a lot. He knows using fossil fuels is not a perfect system.

“Part of our power at the sustainable business center comes from solar and is renewable, so that helps. We also pay to offset all of the carbon emissions for the salmon that come into Illinois, and we take that money and invest it into wind energy in the Midwest. So that’s one element of making the system, we believe, a little more sustainable.”

Sitka Salmon Shares also invests one-percent of its proceeds back into salmon habitat restoration, and salmon education. He thinks the money should be enough to support two summer internships for college students back in Sitka.

Although this is the only place where students fit into the business model, it’s not hard to look at Sitka Salmon Shares as an academic exercise that has taken on a life of its own. Professor Mink is walking the walk.

“If I’m going to teach it, and I want students to go out there and do it, well this offered me a cool chance to be able to try it myself, and to learn lessons that I could pass on to students.”

As a seasonal business, most of Mink’s 7 employees last summer were students. This summer, he’s hoping to hire 11 or 12 as Sitka Salmon Shares expands into a 5-month season, with the addition of longliners supplying halibut and black cod. Every box of fish contains recipes, and Mink has organized cooking classes with local chefs for up to 35 of his members at a time. 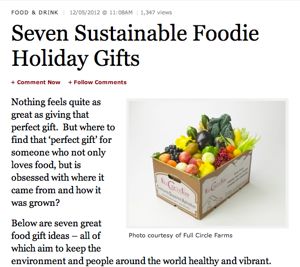 Sitka Salmon Shares was featured in this article in Forbes in December.

Mink is getting a lot of press. Sitka Salmon Shares was featured in the online version of Forbes Magazine last month. And the tv time doesn’t hurt either.

Still, name recognition not quite where Mink would like it to be just yet.

“Funny thing is, a lot of people come up to me and say, Is Sitka your dog?”