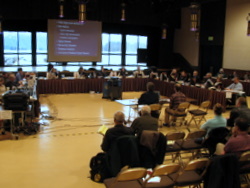 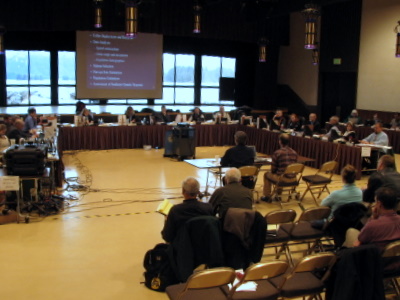 The state Board of Game meets through January 15 in Sitka. (KCAW photo/Robert Woolsey)

The regulatory portion of the state board of game meeting convened in Sitka this morning (Friday 1-11-13), but no new regulations were passed.

Instead, the board heard reports from area wildlife managers and field personnel who collect the data needed to make informed decisions about game management.

The highlight of the morning was black bear research.
Listen to iFriendly audio.

The state’s Fish & Game board meetings typically are not celebrated for their entertainment value, but bear research can make for pretty good story telling, even if it’s scientific story telling.

Management coordinator Neil Barten told the board that the study of black bears on Prince of Wales Island was prompted by a sharp increase in hunting beginning in the late 1990s, 75-percent of it from non-resident hunters. That meant sending biologist Boyd Porter into the field to figure out what exactly the black bear population was on Prince of Wales, and what level of harvest it could sustain.

But, like a lot of research, Porter’s work turned up more than numbers. Some surprising information came to light.

“Some of these bears use 1-3 den sites per winter – some of them make moves during the winter, which is a bit unusual but not unprecedented. They found that in some work they did on Vancouver Island.”

Prince of Wales is also at the center of Southeast’s remaining timber industry, which is relevant to bear behavior. Most people imagine bears denning up in craggy caves, or high on slopes. Prince of Wales bears have a different strategy.

“Ninety-nine percent used old-growth structure for their dens. There was only one that was partly excavated, and that was under an old root wad.”

Most of the dens are on the ground, carefully bedded in the cavities formed by the roots of a large tree. But, Porter did show one slide of a black bear den 26 feet up in a red cedar tree. He said that when the den was in use, the bear’s hind end actually stuck out of it.

Board member Nathan Turner, from Nenana, noted that this was quite different from black bear behavior in the interior. Porter responded that interior bears were known to excavate dens through the snow, sometimes in a half-hour or so, and make do with whatever bedding was handy. He suggested that black bears in Southeast and British Columbia –- and interior black bears — had adapted to different conditions.

Porter and his assistant, Steve Bathune get to see their fair share of bear dens in use – that’s where they collect most of their hair and tissue samples, and collar bears. And it’s also where they learn time and again that bears are not true hibernators.

“When we visit these guys, they’re wide awake and ready for you when you get to the den entrance… This big male, 350 pounds just waiting for you, wondering what you’re doing. Not what you’d call asleep in the den.”

Porter said it’s easier to tranquilize a bear and gather the necessary samples while it’s still in the den. Bringing it out and putting it back in was like moving a sack of potatoes.

Still, someone has to make that first approach.

“You take the lowest-ranking guy on the crew and send him down in the hole to do the work.”

Board chair Ted Spraker asked Porter if he personally was ever the lowest-ranking guy, and Porter pointed to Bathune and said, “That’s what assistants are for.”

The state board of game meeting continues in Sitka through January 15th.