Resolved: These students know their stuff 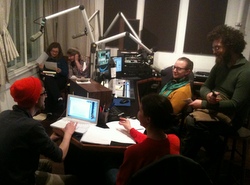 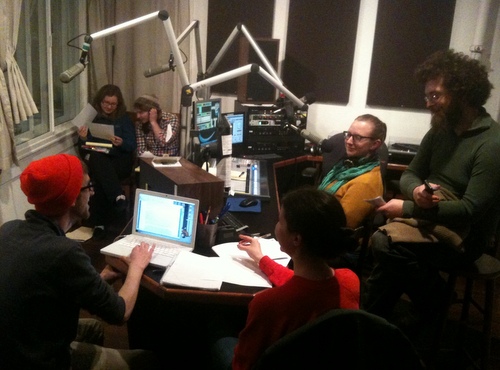 DDF students and coaches prepare to go on the air for a live public forum debate Monday night. In the background are Annemarie Pike and Celia Lubin, who argued the negative side of the resolution. In the foreground are Ryan Apathy and Chaya Pike, the affirmative team. Coaches Stefanie Ask and Cassidy Patnoe are at right. (Photo by Peter Apathy)

The Sitka High School Drama, Debate and Forensics team is off to the state tournament this weekend.

On Monday, they gathered at Raven Radio to hold a public forum debate live on the air, similar to the way they’ll compete in Anchorage. The students debate the merits of a resolution chosen well in advance. February’s resolution reads:

Resolved: On balance, the rise of China is beneficial to the interests of the United States.

They must prepare arguments on both sides, learning only moments before (by virtue of a coin toss) who will argue in favor and who will argue against the resolution.

We’ve included audio below. Part 1 is a brief introduction and the first part of the debate. The arguments continue in Part 2, followed by interviews with the judges and the team members. Each part is about 30 minutes long.

Here are iFriendly links for Part 1 and Part 2.