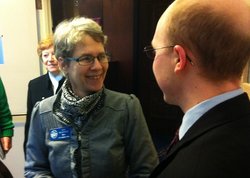 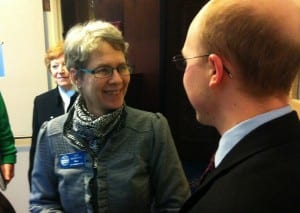 JUNEAU – The Blue Lake dam expansion in Sitka is one of the biggest public works projects in that city’s history. And it went over-budget — to the tune of nearly $40 million dollars — the day construction bids were opened last summer.

In any other session, Sitka might have looked to a powerful local senator, and a state surplus to make up the difference. But Sen. Bert Stedman lost the chairmanship of the Finance Committee, and the governor decided that this is the year to cut the state’s spending on public works projects by more than a third.

Observers are not optimistic that big-ticket items will be funded. Still, Sitka officials walked the hallways in Juneau this week, figuring they might as well try.

That’s a statement about her business suit, not a prediction for the task ahead.

“Oh, my gosh, no. Are you kidding me?” Hackett said. “I’m way too optimistic for that.”

They’re on their way to see Lt. Gov. Mead Treadwell. He’s the first of many meetings that day, and they’re among 100 local officials from across the state are doing the exact same thing on this rainy Thursday, at the end of the Alaska Municipal League’s winter conference. During the meetings, each tries to convince a lawmaker why their own community’s needs should take priority.

Haines Mayor Stephanie Scott is among them. She described a meeting with Treadwell on Wednesday.

“And I said to him, ‘Lieutenant Governor, I live on the only toll road in Alaska, and it’s called the Inside Passage. And we need a vessel to drive on that road,” Scott said.

Her priority on this trip is the Alaska Class Ferry. Plans for a 350-foot vessel were unexpectedly changed by Gov. Sean Parnell, who opted instead for two smaller vessels. But these visits are about a bigger picture, too.

“The representatives and senators need to know that they’re not operating in a vacuum,” said Scott, who also is a board member for the Municipal League. “Their constituencies are out there, thinking and learning and questioning and suggesting, so that it really is a process — a democratic process.”

Sitka’s priority on this trip is to get funding for the Blue Lake dam. The city is raising the height of the dam by 83 feet. Bids for construction came in way above engineers estimates — nearly double the cost, in fact. That’s left the city scrambling for money.

Hackett is sitting in a chair outside the office of state Rep. Cathy Muñoz, a Juneau Republican.

“Cathy Muñoz is the only representative from Southeast on the finance committee,” Hackett said. “So it’s really good to hear one of her staffers say she wants to meet with everybody from Southeast.”

Hackett said the day was “a little intimidating” at the beginning, but that she’s getting comfortable meeting with state lawmakers. This is Hackett’s first trip to lobby on behalf of the city.

Still, she says the meetings have gone well, and that legislators have been receptive to at least hearing about Blue Lake.

“It doesn’t mean that we’re going to be getting assistance this year, because times are tough at the state,” she said. “But at least there hasn’t been anybody closing the door in our face, or yawning while we’re talking.”

So far, the state has kicked in nearly $50 million for Blue Lake — about half the initial cost of the project. Half of the city’s current request would be about $20 million.

“The chances of getting $20 million in this year’s capital budget is near zero,” said state Sen. Bert Stedman, R-Sitka.

He’s sitting in a rocking chair at the end of a conference table in his office. And he says there are a few factors working against Blue Lake: The capital budget, which funds one-time projects, is going to be smaller this year. Legislators also aren’t very likely to advocate for a big-ticket project that could take money out of their own districts. But even within a district, the competition for money is fierce. Stedman taps on a nearby notebook with all of the capital budget requests for his Senate District.

“It’s what, a 2-and-a-half inch binder? That’s got to be a good two inches of paper,” he says. “Each sheet is a separate project. I haven’t totaled them up, but there are 23 communities in our Senate district. We’re one of 20 Senate districts.”

Still Stedman says it’s not a pointless trip for the Sitkans, or other local officials who hope to help their communities. Even if Blue Lake doesn’t get much money this year, energy is a huge concern across the entire state, and Stedman says it’s good for legislators to know the whole picture. And if he were in the shoes of Hackett and McConnell and the others from Sitka?

“I’d spend my time on the third floor with the governor’s office,” Stedman said. “And I’d spend some time with AEA, the Alaska Energy Authority.”

Anyway, he says Blue Lake is a short term obstacle in the way of Sitka’s long-term solution – a hydro project at Takatz Lake.

But still, what about those long odds? Why spend time meeting with legislators about something that seems unlikely to happen?

“Never make assumptions,” said Sitka Mayor Mim McConnell. “Don’t assume, always hope. We went in there with the hope that maybe, somehow, we’ll be able to get some funding.”

McConnell says they told legislators that if nothing happens, and the city has to bond out for the entire project, electrical rates could rise by as much as 60 percent. They told legislators that two new businesses make their products using propane because there’s just not enough electricity, and that a third — a proposed fish waste processing plant — called off plans to build in Sitka because it wouldn’t have had enough electricity.

“Obviously nobody made any promises,” she said. “But we got a lot of sympathy. And it was sincere sympathy.”

And some legislators told them that if they felt stonewalled by anyone, to give them a call for help.

“It wasn’t just an empty comment,” McConnell said. “There was actually something behind it, I think.”

The legislative session is about a third of the way through, which means it’s too early for anyone to know exactly whether the budgets will contain even a portion of the $43 million the city requested.

McConnell says she’s willing to make another visit if it will help, but that for now, it’s time to watch and wait.