Award program makes it easier to be green 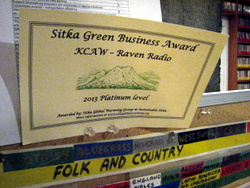 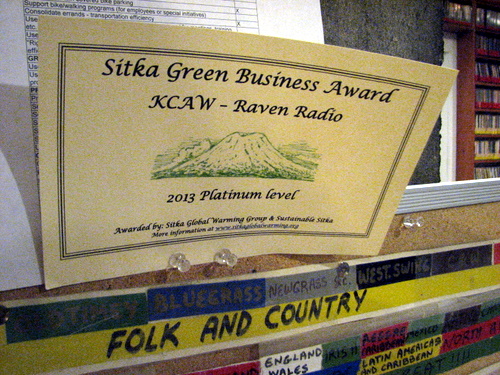 The Sitka Global Warming Group/Sustainable Sitka has announced its Green Business Award winners for 2013. A total of twenty-six businesses met the organization’s criteria for green business practices this year, nineteen of them at the platinum level.

What started out four years ago as a publicity project for Sustainable Sitka has turned in to a source of pride for some of the businesses who participate.
Listen to iFriendly audio.

Michelle Putz is a first-term member of Sitka’s Assembly who was elected last fall on an openly-green platform. She helped develop the Green Business Awards in 2009.

Putz says she wasn’t necessarily trying to create change, as much as acknowledge the change that was already happening.

“There were businesses out there that were doing good things. And that was really why it came about. We wanted to say thank you for what they were doing. But also it has led into a list of best business practices for being green, and supporting community, that other businesses now have. Sometimes they can pick up things from this list.”

Nominate an organization for a Sitka Green Business Award.

Karen Parker, with the Alaska Computer Center, says she didn’t wait for someone else to nominate her business.

“A lot of these are good business practices, and good for the environment at the same time, so we said, Since we’re doing it anyhow, let’s put in a nomination. And we did.”

The Alaska Computer Center has won a Sitka Green Business Award at the platinum level for all four years. That means they participate in over 15 green business practices.

“We collect cardboard, plastics, and then make a pilgrimage once a week to the recycling place. And as we’ve done that over the years I can see that the recycling people have given us more and more alternatives of materials that we can recycle.”

Rob and Karen Parker display a Green Business Award certificate at their sales counter. Other than that, there’s nothing about the appearance of their business that shouts “green.” But they believe the program has value, beyond just feeling good about the environment.

“There are people who will bring used ink cartridges back because they know we recycle them, when they’re getting their new ink cartridges. Or people who get a new battery backup because it’s more energy efficient than whatever’s been going on, and it preserves equipment. So, in that way I’d say they’re aware of it, and they appreciate we’re doing it, and would like to do it themselves.”

Twenty-six winners is a lot of businesses in Sitka. Even KCAW received a platinum award. The group also gave special recognition to fishermen, for their contribution the the local Fish-to-Schools program.

Putz and Sustainable Sitka want to give out even more awards this year, in another round in April. For Michelle Putz, the Green Business Awards won’t be over until there are no losers.

“I would love to have a big event. Presenting the awards at something very public. That would be a nice next step.”