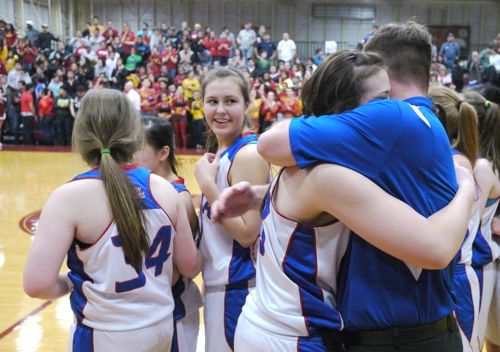 Sitka Lady Wolves coach Rich Krupa throws a bear hug around his team after winning the final of the 3A Region V final. (KCAW photo/Robert Woolsey)

The Sitka High Lady Wolves are this year’s Region V champions in the 3A girls classification.

The Mt. Edgecumbe Braves are the boys champions.

The two big wins last Friday night (3-8-13) were the climax of nearly a week of basketball in Sitka, as twenty teams competed for berths to the state tournament in Anchorage later this month.
Listen to iFriendly audio.

At just about any sporting event at Mt. Edgecumbe’s BJ McGillis Gym – but at the Region V basketball tournament in particular – it’s best to check your eardrums at the door.

The Mt. Edgecumbe rock band, matched against the Sitka High pep band, with only a drum line and hundreds of screaming kids separating them, is pure volume.

Friday night may have been the loudest of them all, as this year’s season-long “Battle of the Bridge” boiled down to two final games, and a chance for a single tournament berth at state.

In the new 3A structure in Southeast, there are only Sitka, Mt. Edgecumbe, and Petersburg. One winner – no second place.

The Sitka Lady Wolves won it all this time, 35 – 32, over the Mt. Edgecumbe Lady Braves in a game that was tied or within a basket for the duration.

“You know, they overachieved all year and worked hard. Mt. Edgecumbe did a great job. It’s been a tooth-and-nail fight all season, and we just happened to come out on top this time. I just love the effort the girls gave tonight”

The Lady Braves could not find their rhythm early. A three-pointer by Scarlett Beaver was their only scoring in the first period.

After that, the teams began to trade baskets until the final few minutes, when the game turned on free-throws.

The Lady Wolves were up by only one point, with two seconds to play, when sophomore Sid Riggs went to the line and it was déjà vu all over again.

KCAW – I’m trying to think of the last Sitka High girls basketball game that did not end with Sid Riggs sinking a couple of clutch free throws.
Krupa – It’s been a while! But she’s tough. She’s a great sophomore, but everybody contributed, and everybody played a huge role.

Riggs finished with 15 points for the night. Reid with 13.

On the boys side, the Mt. Edgecumbe Braves topped Sitka High 55 – 45 to take the 3A crown, in a game that was closer than the score suggests. There were times during the first period when it looked like the top-seeded Wolves — who lost to the Braves on Wednesday — had found their game again.

“My young men played very hard tonight. We dug ourselves a hole a few times and didn’t play as well as we are capable of. But I thought they really showed their character in how they battled back. I’m really proud of them.”

The Braves were down by five after the first period, but closed to within one point of Sitka by the half.

In the third period, the Braves looked like a different team.

KCAW – At halftime did you settle them down, or pump them up? What happened?
Young – We talked a lot about – and I mean this respectfully to Sitka – I thought they played a very good first half, and I didn’t think we played a very good first half at all. We talked about the fact that we were only down one, and we weren’t sure that they could play better in the second half. I thought we could have a better second half because of how poorly we played in the first half. I didn’t think we were in a bad spot.

Young also says he “let John Peterson be Peterson.” The Mt. Edgecumbe senior went scoreless in the first period, but had 25 by the time the night was done, including hitting 15 of 17 free throws – ten in a row in the fourth quarter.

Fellow senior Leo Ford was next-highest for the Braves, with 14.

Both teams get a week off before heading to Anchorage. Young says, for his team, it will be “one more week of running lines.”

The Braves will open the state tournament against Valdez.