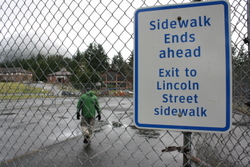 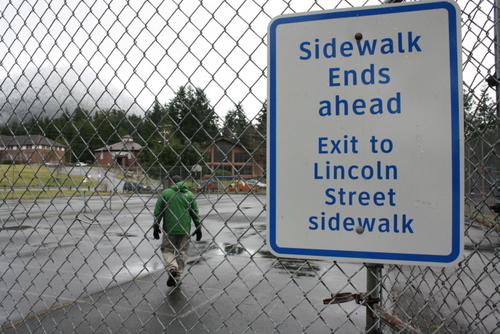 A sign instructs Jay Lageschulte, of Omaha, Neb., to cut across the tennis courts in Sitka, during a walk from Crescent Harbor to the Sitka National Historical Park on Feb. 13, 2013. A seaside walkway proposed for the shoreline between the two sites would simplify the route. (KCAW file photo by Ed Ronco)

At its regular meeting Tuesday night, the Assembly approved a contractor to build the Sitka Sea Walk, but voted down a proposal to set aside $48,000 a year to maintain (and eventually replace) it. Separately, it gave the green light to the Sitka Harbor Department to apply for one grant, and unanimously rejected another.

Sea Walk
CBC Construction bid $1.2 million to build the Sea Walk. It’s a long pathway that will offer visitors — and locals, of course — a straight shot from Crescent Harbor to the Sitka National Historical Park. Right now, the pedestrian route includes cutting across a tennis court and crossing the same street twice.

No problem, said the Assembly. After all, the money for the project comes from a state tax on cruise ship passengers. And Assembly members like Phyllis Hackett said the walkway will only improve the experience for visitors, especially with added improvements, like lighting, and a path that goes out to the end of a breakwater near the Sitka Sound Science Center.

The bid from CBC was the lower of the two received, and well below the engineers’ estimates of about $1.4 million. The construction contract easily passed.

But then came the idea of setting up a fund to maintain the walkway. The total estimated yearly upkeep of the Sea Walk is about $7,000. That includes trash collection, landscaping, cleaning, maintaining the lights, and the odd repair.

But the Public Works Department said in order to prepare for an eventual replacement of the walkway, once it nears the end of its useful life, the city should bank about $48,000 every year.

“I would urge you not to do this,” said Sitka resident Fred Reeder, the only member of the public to testify on the issue. “To think you have to put $48,000 aside for the concrete, and a couple of bridges, it’s too much money. You’ve already got a dedicated fund. It’s called the passenger fee fund.”

In other words, Reeder said, money will continue to come in from the tax on cruise passengers, and so, when the walkway needs repair, why not just go back to that pot of money?

“I think that’s a good point. I think it’s a really good point,” Hackett said. But, she added, she’s also “a little paranoid, because we’ve had so many infrastructure problems, and so many needs that were never planned for in years past, and now all of a sudden it’s coming home to roost, and it’s coming at a point in time when we don’t have the money coming in. We don’t have the capacity to repair the things we need to repair.”

Assembly member Thor Christianson was sitting in the Mayor’s chair in the absence of both Mayor Mim McConnell and Deputy Mayor Pete Esquiro. He said he likes the notion of saving for repairs and maintenance, but that he agreed with Reeder that $48,000 a year might not be the best way to do it.

“I’m hesitant to block off this much money,” Christianson said, “because this is essentially for total replacement, from our portion of the passenger fee fund, because this is exactly the kind of thing we’d be applying to the state for from the state portion.”

Cruise ship head tax money goes to both cities and the state. Cities can take their portion and spend it a certain way, and they can apply to the state for funding for certain projects.

In the end, the Assembly decided saving for maintenance was good, but this version wasn’t the way to go.

“But we like the idea of the idea,” Christianson added, after the unanimous vote against the savings plan.

Harbor grants
The Sitka Harbor Department got half of its requests before the Assembly last night. Members agreed to let the Harbor Department apply for a state grant of up to a quarter-million dollars. If Sitka gets the money, it would buy a powered barge that would allow it to collect fish waste and relocate it to open water.

Right now, the city pays a contractor about $42,000 to do that. Sport fishermen are no longer allowed to dump salmon carcasses into the water near fish cleaning floats, because it attracts marine mammals and birds, and those animals can be hazardous to the nearby airport.

The Harbor Department also wanted to apply for nearly the same amount of money to buy an ice making machine. It would provide ice to sport fishermen to help them preserve their Chinook salmon.

Reeder also testified against this measure, saying there are already places to obtain ice.

“If I need flake ice, I’ll go down and buy it from Sitka Sound, from SPC or I’ll go out to Silver Bay,” Reeder said. “You get into the business of making ice… that’s silly. You say, well, it’s free money, we can use that money, and it’ll be free. Nothing’s free. Now you’ve got to provide it with electricity, maintenance… refrigeration is not cheap to maintain.”