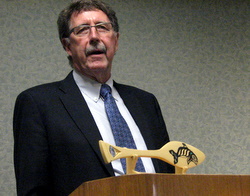 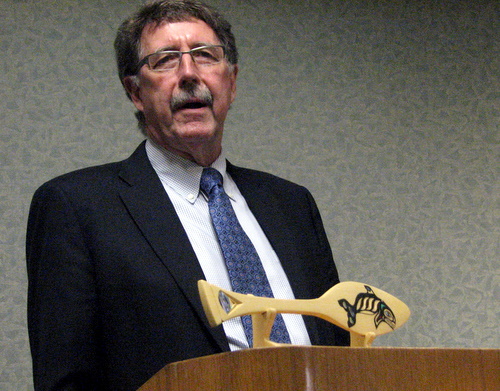 A revised version of Sealaska Lands Legislation is back before Congress.

Sen. Lisa Murkowski introduced the new bill, known as S.340. A similar measure has been introduced into the House by Congressman Don Young (H.R. 740).

S. 340 replaces legislation from two years ago which came under immediate fire from environmentalists, Southeast communities, and even some Sealaska shareholders who claimed it overstepped the intent of the 1971 Alaska Native Claims Settlement Act — known as ANCSA.

S.340 is still about expanding the timber base of Sealaska, whose primary business as a regional Native corporation has been timber harvest.

Rick Harris was up front about that in his presentation to the Sitka Chamber of Commerce.

Sealaska is the largest private land owner in Southeast, with 290,000 acres. That the corporation is entitled to select another 70,000 acres has never been in dispute.

Harris told the Chamber that some of the land available for selection under the 1971 ANCSA withdrawals simply wasn’t practical.

“Those boxes include places like the entire Situk River corridor, which is one of the premiere salmon and steelhead in northern Southeast Alaska, up near Yakutat. We can select the Craig municipal watershed. We have some high sockeye-producing streams that are not really the kind of properties that belong in Sealaska’s ownership. They really do need to belong in public ownership.”

The challenge — and Harris was also candid about this — is finding 70,000 acres in Southeast Alaska that everyone can agree on.

Calder Creek is a highly-productive salmon stream, and some of the highest-volume old growth left on northern Prince of Wales Island is in Calder Bay.

This is an excerpt of a commentary broadcast on both KFSK Petersburg and KCAW Sitka, written collectively by residents of Point Baker.

Sealaska will most assuredly cut every last bit of it, leaving the entire watershed bare, with inadequate protection for the streams.”

The commentary was delivered to radio stations with a page including 23 signatures of area residents.

Eight of the nine large parcels selected by Sealaska in the revised lands bill are in the same areas as in the previous bill. Most of the selections have been scaled down; the Calder Creek selection, however, has nearly doubled to almost 7,000 acres.

Pt. Baker, and other communities affected by selections had major conservation organizations at their back two years ago. One of the region’s largest, the Southeast Conservation Council, announced last week that it supported the new bill. In a blog by SEACC’s forest program director Bob Claus he writes, “Given the considerable changes offered to address the concerns of various communities and interests, in our judgment Senator Murkowski has offered a responsible approach to resolving this long-running legislative controversy.”

In an interview following his Chamber presentation, Harris said Sealaska is happy that SEACC saw the benefits in the new bill.

“We can prove that we’ve listened to people, and that we’ve been able to go in and make changes that try to remove the rough edges off this bill. But, as I say, nobody’s going to be happy with every aspect of it.”

Harris said there would be no logging or other development in these areas.

“These sites are for cultural purposes, to do cultural research, cultural education. For kids to be able to go to sites like this and to understand how their ancestors lived.”

Sealaska Lands legislation has been introduced into every Congress since 2007. Harris wouldn’t speculate on its chance of passage this time, but he called arriving at a compromise with the Forest Service and environmental organizations was “a major milestone.”