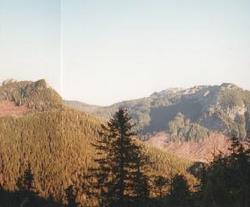 The opinions expressed in commentaries on Raven Radio are those of the author, and are not necessarily shared by the station’s board, staff, or volunteers. To publish a commentary on KCAW, please contact us using the tab at the top of this page.

Greetings from your neighbors on North Prince of Wales Island. We, the residents of Point Baker and Port Protection are asking you to join our voices in opposition to the latest Sealaska Lands Bill, S. 340, introduced recently by Senator Murkowski.
Listen to iFriendly audio.
This is the fourth time Sealaska Inc. has attempted to pass special interest legislation which would rewrite the Alaska Native Claims Settlement Act (ANCSA) giving them title to 18 parcels of public land, totaling about 70,000 acres. This land will not be located around Native villages where it was required to be taken under ANCSA, but around our towns. And that is not fair. Most of the land in this bill has been selected for its timber value, but there are also 9 special interest areas and a number of cultural sites, yet to be specified, scattered throughout the Tongass.

We have opposed this legislation for eight years along with people across the political spectrum including residents of nine affected communities such as ours, hunters, guides, sportsmen, fishing and environmental groups, subsistence users, and concerned citizens, Natives and non-Native alike.

Our immediate concern, and hopefully yours, is what will become of nearby Calder Bay if this bill were to pass. Sealaska would gain ownership of the entire Calder Creek watershed, approximately 6,700 acres. Whatever happens there will directly affect us. Our communities have tried to protect as much of this critically important deer migration corridor as possible over many years.

Calder Creek is a highly productive salmon stream, and some of the highest volume old growth left on the north end of POW is in Calder Bay. Sealaska will most assuredly clearcut every last bit of it, leaving the entire watershed bare with inadequate protections to the stream. More road access with the associated hunters, and the resulting second-growth will not fill the freezers of our local hunters. More degraded wild salmon habitat will just add to gradual decline of our wild stocks, underscoring the insincerity of our politicians who tout our sustainable salmon runs, yet fail to legislate to protect them.

It is not fair Sealaska is looking to move from around their towns to get the very best and biggest timber around Calder; we view it as money in the bank as it is. They view it as a fast buck. Leaving the habitat intact is our investment for our future and for our kids.

Those of us who realize the impacts of what will be lost, if this legislation passes, MUST SPEAK OUT. If we won’t, who will?

We have written letters to Senators expressing our opposition to the bill, recorded commentary, testified at hearings, and traveled to Washington DC to voice our concerns. We want Congress to know how important every remaining stand of old growth on North Prince of Wales is. Despite our opposition and the opposition of so many others, Sealaska and our Congressmen continue to push this legislation. Why?

Sealaska agreed to the 1976 ANCSA amendment 37 years ago, requiring their land selections be taken around Native villages, within designated areas, or boxes. Now the corporation wants to exchange that land from around their towns to around our towns. How is this fair? Are we, and you, to be penalized by Sealaska‘s destructive logging practices? Passing this bill would be a great injustice.

We are expected to be satisfied with the compromises that have been made in this new version of the bill, but why would we support any compromise when we, and you, only stand to lose, whether it be a little or a lot? Especially considering that no legislation is necessary to fulfill the obligations of ANCSA to the corporation. The remaining land that Sealaska was authorized to select under the terms of ANCSA is available to them now, and simply requires Sealaska to make an official request from the Bureau of Land Management. In fact, Sealaska has requested these lands, which are “in the boxes”, in a 2008 letter to the BLM. All that is necessary is for the BLM to finalize that request.

For decades, we have invested our time, energy, and money in this corner of the world. We value its remoteness, its wildness, its beauty, its abundant resources, whether fish, game, or timber for our small local mills. We have a way of life, familiar to most Alaskans, where we are less insulated from nature and more aware of our dependence upon it for our food and livelihoods.

Maintaining this way of life has required us to actively participate in the management of the forest around us. We have always had a voice, because the National forest land is ours and yours; it is and should remain public land. We never considered our investments and our way of life could be threatened by our congressional representatives.

In addition to S. 340, Senator Murkowski has recently introduced another smaller, bill,S. 14, with the rationale of granting Sealaska a smaller amount of timber, also outside the boxes, until a more “comprehensive” solution can be devised. We oppose both bills.

If there are places in the Tongass that you care deeply about, then you will understand why we are asking you to help us retain a voice in protecting this special place.

Please add your voice to ours by emailing or writing Senator Murkowski and the other Senators on the Energy and Natural Resources Committee and say that NO congressional legislation is needed to finalize the Sealaska Corporation land entitlements. You can find the bills and associated maps here.

Note: This commentary was signed by twenty-three residents of Point Baker and Port Protection. View the signature page.