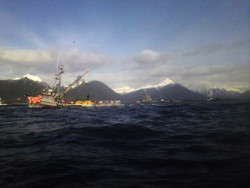 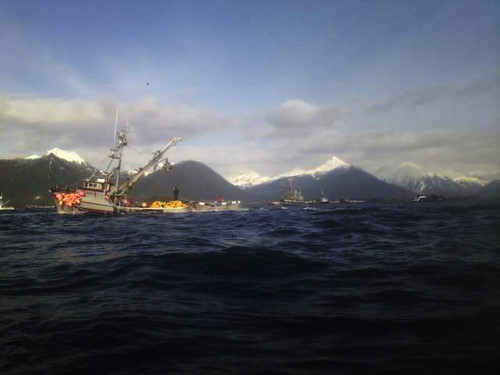 Seiners fish for herring during Wednesday’s opening in Sitka Sound. The fleet brought in roughly 2,100 tons of the small silver fish during the three-hour opening. (Photo by Daniel Olbrych)

The herring fleet gathered about 2,100 tons of fish during Wednesday’s first opening of the Sitka Sound sac roe herring fishery.

Those are the preliminary numbers from the Alaska Department of Fish & Game. Wednesday’s opening lasted just over three hours, from 3 p.m. to 6:05 p.m.

Aerial surveys have shown herring are starting to move from offshore areas into the island groups just north of Sitka. Aerial and vessel surveys continued Thursday, but as of 10:30 a.m., an opening had NOT been announced.

The fleet is ultimately working toward a harvest limit of 11,549 tons. Last year’s catch was worth about $640 a ton, making the total ex-vessel value of the fishery around $8.5 million.