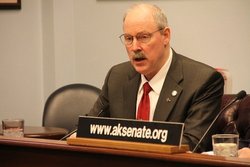 Five Alaska senators have organized a new coalition around an old idea.

The Senate Coastal Caucus has been a feature of past legislatures, but never as a formal organization.

Sitka Republican Bert Stedman organizes the Coastal Caucus, and calls meetings, but he says that with only five members, there won’t be any need for an actual chairman.

Five doesn’t sound like a big coalition, but Alaska has only twenty senators. All of the Coastal Caucus members are in the 15-member majority. Sen. Stedman has done his math.

“When all five of us agree on something, it will definitely make an impact.”

Stedman says the Coastal Caucus has been an informal feature of the Alaska Senate for about ten years, and consisted of himself, Gary Stevens from Kodiak, and Tom Wagoner from Kenai. The three would occasionally meet to discuss policy issues of common interest.

Because of changes in the political landscape in the capitol, the new Coastal Caucus is going to meet more often.

“After the restructuring of the Senate it became very evident that the interests needed to be broadened out, and the coastal communities needed to have a voice in that. And the way to do that more effectively was to formalize the group and expand it.”

Sen. Wagoner lost his seat in the primary last year, but his successor, Pete Micciche of Soldotna is on board. Donny Olson, from Golovin is also in, as is Juneau’s senator Dennis Egan.

Stedman and Gary Stevens, until last year’s election, were two of the biggest players in the senate, as co-chair of the Finance Committee and Senate President respectively. The governed in a coalition with ten senate Democrats.

Now that the new Republican majority runs the Senate, Stedman is candid about the Coastal Caucus’s role in balancing the influence of the railbelt.

The Coastal Caucus could have gone a step further, but chose not to.

M07 chain, and the big deltas of the Yukon and Kuskokwim, and that’s Lyman Hoffman, and he sits in the minority. But I’m sure we’re going to have conversations with him from time to time also.”

Stedman says the main policy drivers for the Coastal Caucus will be energy, transportation, and communication. He stresses that the caucus is working toward balance — not polarity.

He does not want the legislature to lose a sense of common purpose that has taken years to develop.

“I’ve counseled my colleagues that going back to the urban-rural divide in Alaska is not a good idea. It’s not in the best interest of the citizens of the state and creates a somewhat difficult working environment. And quite frankly a lot of our citizens get left out or pushed into the background. And there’s no doubt in my mind that that’s the direction the legislative arena has taken.”

Stedman says the Senate Coastal Caucus has been in the works for about a month. Its first steps will be to take a hard look at the House gasline bill, HB4, which has a fiscal note of $400-million, with much of that funding targeted at the railbelt. The caucus will also examine the composition of the Board of Fisheries, and other policy-making bodies, which may not have adequate coastal representation.