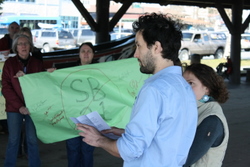 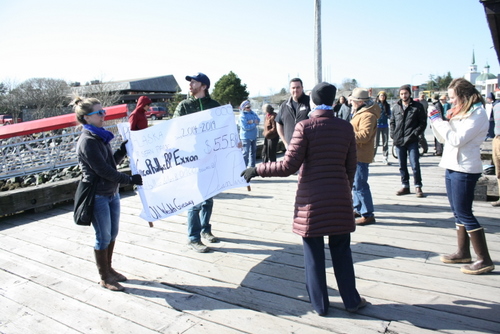 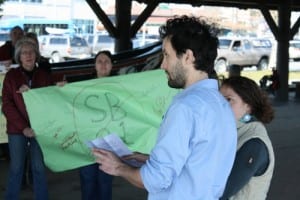 Sitka resident Brian Sparks speaks at Thursday’s rally against Senate Bill 21 in Sitka. “Big business tells us if we cut taxes they’ll give us jobs. Actually, ExxonMobil, BP and ConocoPhillips aren’t even saying they’ll give us jobs. They just want us to cut their taxes and then, you know, we’ll see,” he said. The rally was organized by the Sitka Conservation Society. (KCAW photo by Ed Ronco)

Protesters in Sitka ripped up a giant check made out to Alaska’s big three oil companies Thursday at a rally opposing changes to the state’s oil tax structure. About 75 people, including Sitka’s mayor, gathered at Crescent Harbor Shelter at noon to voice their displeasure toward Senate Bill 21.

The measure lowers taxes on oil companies by billions of dollars over the next several years. The Sitka rally against it coincides with others around the state, and is locally organized by the Sitka Conservation Society.

Last month, the Senate passed the oil tax bill, 11 to 9. Sitka’s Republican state Senator, Bert Stedman, voted against it. And State Rep. Jonathan Kreiss-Tomkins, a Democrat from Sitka, says he also plans to vote no when the bill comes to the House floor.

“It’s a profound amount of money to some of the most profitable multinational corporations on the face of the Earth,” he said.

Kreiss-Tomkins says profits aren’t “intrinsically bad,” but that the tax incentives aren’t needed for oil companies to continue their work in Alaska.

“This is the point that Sen. Stedman makes, that Senate and House Democrats make, that Gary Stevens, a Republican from Kodiak makes, that I believe,” he said. “It’s immensely frustrating that we might forego an incredible amount of money that could be used for such good and betterment for the state of Alaska for, from my perspective, no good reason.”

“Tax policies do affect business decisions, so we want meaningful reform — something that makes those producers produce more oil, one way or another,” said Cory Baggen, vice president of Sitka-based Samson Tug & Barge. She’s on the Sitka Chamber board of directors, and is vice chair of the statewide chamber’s board.

“I mean, they all have heard that it’s 90 percent of state government’s budget, and they’ve heard those kinds of statistics,” Baggen said.

She used her own company as an example of the direct impact of oil production.

“We used to have 12 employees here. We’re almost down to eight,” Baggen said. “I haven’t shipped a drill rig in five years. I’d love to do that again. That would be great,” Baggen said. “Those monies support administrative staff that we actually have here in Sitka. People think people don’t work for the oil companies. That’s true, but all these support services make money off of that production. We need that, even if we are in Southeast Alaska.”