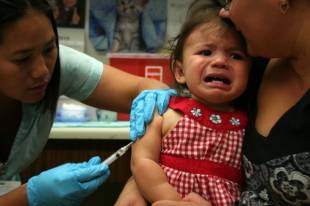 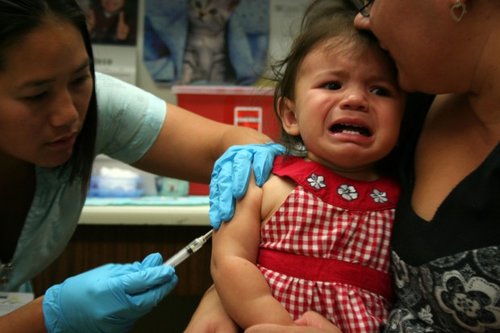 Annabelle, 1, gets an immunization for pertussis at a community health center in Richmond, California. (Photo by Anne Brice/KCAW)

Whooping cough is on the rise in Alaska. It’s been moving up the coast from California, and in March, caused the death of an infant in Western Alaska. But there are ways to avoid catching the highly contagious bacterial infection.

Ellen Daly is a nurse who works at the Public Health Center in Sitka. She says the best way to combat whooping cough is by getting immunized.

She says whooping cough is quickly spreading through Alaska and that babies and small children are the most vulnerable to the bacteria.

Whooping cough, or pertussis, might resemble a common cold at first, with a sniffle and a cough. But if the cough sticks around for longer than 7 days and progresses to violent fits of hacking that sound like this: (Sounds of a baby with pertussis, coughing).

…it’s a good sign it’s pertussis, especially if the coughing ends with vomiting.

The highest rates of infection are in places where groups of kids congregate, like schools and daycare facilities.

The good news is, it’s easy to protect against. Infants as young as two months old can be immunized, and it’s a part of the regular series of vaccinations that all kids receive. Daly says adults who are around kids should also be immunized.

Daly says first, you should go to your healthcare provider for your shots. But if you can’t, because you’re uninsured or underinsured, you can visit the Public Health Center, and receive a vaccination.

“We’re here to serve those who can’t get the service anywhere else. Someone who doesn’t have Medicare, or they’re not employed…they don’t have money to go the doctor.”

She says everyone can receive an immunization to pertussis if they want one.

To learn more about pertussis, and to listen to the sound of its accompanying cough, you can go to the State of Alaska’s Public Health webpage. For more information about the Sitka Public Health Center’s vaccination program, you can call 747-3255.