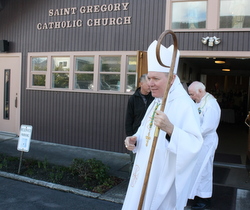 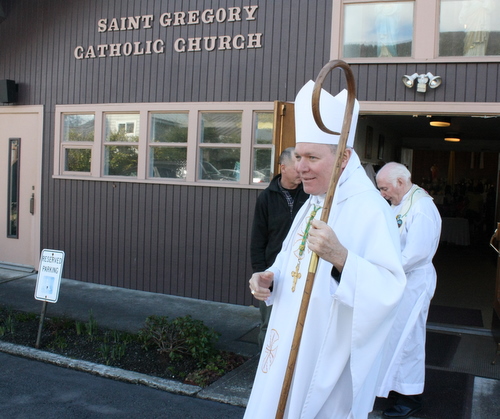 The leader of the Catholic Diocese of Juneau wants to talk … to you.

Bishop Edward Burns is in Sitka this week on what’s called a “pastoral visit.” Most of his time will be spent meeting with local Roman Catholics, but he’s holding a public forum at  7 p.m. tonight at Harrigan Centennial Hall.

Burns sat down for an interview with KCAW:

During Sunday Mass at St. Gregory Catholic Church in Sitka, the parish pastor, the Rev. Jim Blaney, is passing out communion to parishioners standing in a long line down one side of the church’s center aisle. On the other side of the aisle stands Bishop Edward Burns, leader of the nation’s smallest Roman Catholic Diocese.

The Diocese of Juneau is home to about 10,000 Catholics and 15 parishes. Celebrating Mass will serve as bookend tasks on Burns’s trip. In between, a busy, busy schedule.

BURNS: I’ve had the chance to meet with the superintendent of schools, the chief of police, I meet with the mayor tomorrow, to let them know in their role as public servants, and in all that they do for their community, we’re partners. And whatever we can do to assist for the common good of this community, we’d be more than happy to help.
KCAW: You’re reaching out beyond the community of Catholics in Sitka to the general public. Why?
BURNS: The Catholic community here in Sitka, the Parish of St. Gregory’s, is part of the larger community. Being part of the larger community, it’s important for us to have an interest in the community, it’s important that this community thrive. It’s important that the community continue to better itself.
KCAW: What are you anticipating the conversation’s going to be like?
BURNS: I can’t predict what kind of a conversation will arise, because I can’t predict the questions, but I think the very fact that I want to be present to them is an indication I’m so open to receiving their questions.
KCAW: I guess what I’m asking is, are you expecting people to say “Oh, hi, I’m ready for your PowerPoint presentation,” or are you expecting people to go up and say, “You know what I’ve always wondered, Bishop, I’ve always wondered why the meat-on-Fridays thing went away.” What are you hoping the community gets or gives out of this?” 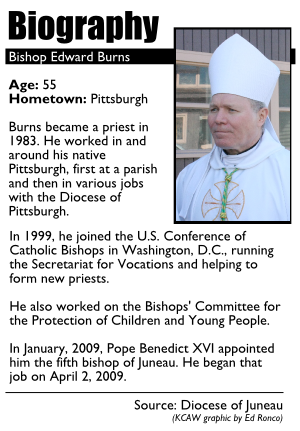 BURNS: “It’s really just a public forum to ask some questions about the Catholic Church, and it’s an opportunity for us to be present to the members of this community. I can’t predict what type of questions will rise, but it will be an opportunity for me to introduce myself, to introduce some very basic tenants of the Catholic Church, and a little bit of background about the Catholic Church in Southeast Alaska and the nation and throughout the world. I think it’s absolutely exciting that we have the election of Pope Francis, who has been seen on the national news a fair amount. I think people both Catholic and non-Catholic are captivated by his great, humble style.
I read in the news that he has now decided not to live in the Papal Palace. He’s going to live in a small suite of rooms in the apartment building that housed the cardinals during the conclave. Now, the Holy Father is only going to live in a couple of rooms in this apartment building. I’m the Bishop of the smallest diocese in the country, and I have more rooms in my house than the Pope. I find it of great wonder, and of course of great beauty, with his humility. That’s a message we want to get out. It’s not about us, it’s about the way we serve others.
KCAW: Does the church dialogue enough with its people?
BURNS: We have a lot more to do in the way in which we dialogue with people. Today is a new day in communication. It seems as though you have to speak in sound bites. The attention span sometimes is a little smaller than what it used to be. You look at the Diocese of Juneau. We have ourselves a website, where we get our information out. We now use video clips to get some of our presentations out on the web. I also tweet. I have a twitter account. It’s amazing. I have over 1,400 followers and they’re from all over the world. The Diocese of Juneau has a Facebook page. It’s all those things the apostles would never have thought of, but it’s at our fingertips today, and it’s yet another way to get the Gospel message out.

At Mass on Sunday, Burns talked about Thomas, the apostle who doubted Jesus had risen from the dead. Burns says Wednesday’s public forum isn’t about convincing those who have their doubts to adhere to a particular faith, or even to believe what Catholics believe. He says he just wants to talk, to put his face with his name, and to learn what people in Sitka have to say about the Church he grew up in, and now helps lead.