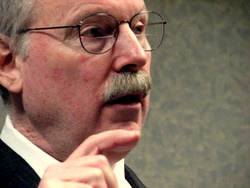 Sen. Bert Stedman calls this year’s rollback of state taxes a “gift” to the oil industry. And while he’s not unhappy with many of the structural changes to the oil tax scheme in Senate Bill 21, he says the numbers just don’t make sense.

Stedman was one of nine Alaska senators to oppose the bill, which passed by a margin of one vote. He outlined his reasons for the Sitka Chamber of Commerce this week (4-24-13).

Bert Stedman has always been a numbers man. That’s why Gov. Frank Murkowski appointed him to the Senate ten years ago.

His defiance of his own party’s signature legislation this session was more mathematical than political.

Stedman told the Sitka Chamber that the costs of extracting oil from Alaska’s “legacy fields” — Prudhoe Bay and Kuparuk — were high, but not uneconomic. About $30 per barrel.

Given the price of oil, he couldn’t make sense of the billion-dollar-plus annual tax break.

“Oil today is at $100. You don’t need to move $1.7 billion. It doesn’t fix anything. So it was, in my opinion, quite a gift to the industry. And they have not come forward and expressed in any definitive terms or timelines what they’re going to produce.”

The Parnell administration, and even Stedman’s own Republican majority, frequently contrast declining production in Alaska with current booms in North Dakota and Texas. The economics of producing oil in the developing world were also debated this session.

Stedman pointed out that Alaska had the only publicly-owned super-fields in the world. Oil development in the lower 48, on the other hand, was taking place in areas where mineral rights are privately owned. (Note: KCAW News did not paraphrase this remark accurately as written here. A more accurate reading would be “…in the country” rather than “…in the world.” Listen to the source material here.)

As for the Third World, Stedman said the costs of obtaining oil in arctic Alaska were high, but there were advantages.

“We don’t have revolutions. So you’ve got to recognize that. We have a stable judiciary branch. You’ve got to take care of that. We’ve got shipping transportation across the Pacific that can be protected by our US Navy — we don’t have to go through choke points. You’ve got to take that into account. And you certainly have to take into account one of the top ten most prolific oil fields on the planet. This is not North Dakota.”

Stedman said Alaska’s North Slope could be producing for generations.

A citizen initiative to repeal SB 21 is already in the signature-gathering stage, with the hope of having a question on the ballot for the August primary election in 2014. Although the initiative is the brainchild of Democrats hoping to put the unpopular tax breaks before voters, Stedman is on board.

“I’m going to sign that thing if it comes around. That’s my opinion of it.”

Beyond the math, Stedman is concerned about the impact the loss of over $1-billion a year in revenues will mean for the state. He said Railbelt legislators were “circling the wagons,” and had no incentive to back issues important to coastal areas, like the Alaska Marine Highway.

He and four other senators from the Republican majority caucus organized a new caucus around coastal communities. Five doesn’t sound like a big coalition, but in the Alaska’s 20-member senate it’s enough.

“Once you have five, and there’s fifteen in the majority, it doesn’t take a mathematician to figure out you can’t get to eleven to move something without one of the Coastal Caucus members agreeing with that issue. So that changed the dialog internally with the senate. It changed their attitudes, quite frankly.”

Stedman says the reduction in oil revenues will force the state into deficit spending for several years, drawing down its $16-billion in reserves. As money gets tight, he expects the Coastal Caucus will ensure that rural and urban areas share the pain equally.

“So as this group coalesces and comes together you’ll see some of our rural issues on the table, or we’ll just start, hopefully, blocking and shutting down the system.”

Stedman said he’ll continue to push for funding for the Blue Lake Dam expansion in Sitka, primarily through working with the Alaska Energy Authority. A driving course at the Public Safety Academy, the Mt. Edgecumbe swimming pool, and a road to Katlian Bay all remain priorities for him.

Stedman’s financial discipline and ability to cross party lines on major issues seemed welcomed by the Sitka chamber. Asked by an audience member if he would ever consider running for governor he replied, “The Republican party is heavily dominated by oil service industry contributions. That pretty much puts it in a nutshell.”