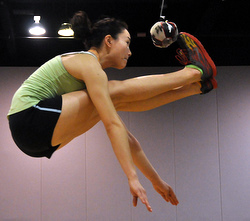 Alice Strick of Wasilla tied the world record of 78 inches in the Two-foot High Kick at the 2011 NYO Games. Mt. Edgecumbe’s Johnna Bouker took fifth this year, with a kick of 70″. (ACVB photo by Roy Neese)

A Mt. Edgecumbe High School student brought home gold from the Native Youth Olympics in Anchorage over the weekend (Apr 26-27, 2013).

Most NYO events, especially the high-profile One- and Two-foot high kicks, don’t take gender differences into account. The Seal Hop is one of the few that does.

“You’re much lower, in a half-pushup position. And you have to maintain the position. Your knuckles are curled, and you hop forward by moving your feet and your hands together.”

The Native Youth Olympics began in the early 1970s, as a way to teach and pass on traditions of Alaska’s arctic cultures. Every event has its roots in the past, including the Seal Hop.

“It was supposed to be used as a way to sneak up on a seal. Let’s say you had your spear strapped to your back. You had to get as low as you can to the ice so that the seal doesn’t take you as a predator. So you’d use the seal hop to get close enough to catch the seal.”

About 500 students in grades 7-12 competed over the weekend at the Dena’ina Center in Anchorage. See the complete results from the 2013 competition.