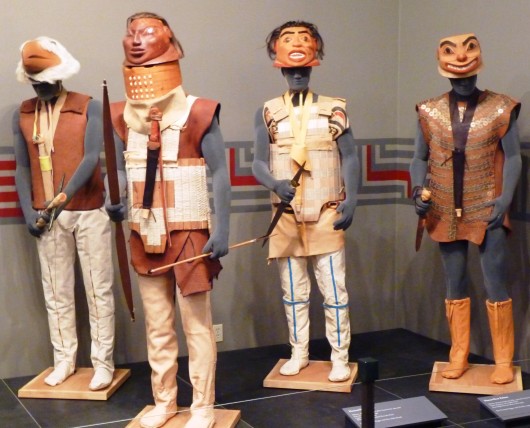 Alaska State Museum Exhibit Curator Jackie Manning is confronted by some imposing figures every time she enters its main gallery.

“And when you first walk in, you’re met by all six of them and they‘re up and they have this presence that I think really gives you the sense of what it would be like to encounter these warriors in life,” she says.

She points to one of the figures, with an abalone-eyed helmet, shelled, protective neck gear and the historic equivalent of a kevlar vest.

“Every time I see it, it leaves quite the impression because it’s fully dressed with the slat armor and the collar and the tunic and the bow and the arrow as well as the dagger. It’s just such a beautiful example of all of the armor on one figure,” she says. 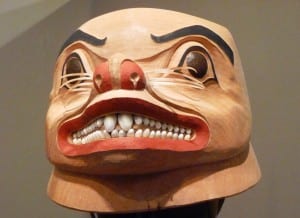 The Marten Helmet, part of the “Rainforest Warriors” exhibit. Click here watch a slideshow from the exhibit, as well as Kay Field Parker’s “Playing with Lightning.”

The museum is a popular Juneau tourist destination, catering to cruise-ship passengers and independent travelers, as well as locals.

It, and other parts of the tourist industry, will likely see more people visit the state this year. Larger cruise ships are on their way, bringing visitors through Southeast and across the Gulf of Alaska. Many tourists continue north, riding and flying to the Railbelt and on to places north and west.

“I think the three shows really work together very well and are going to give our all of our visitors a great impression of the kind of artwork that’s done in Alaska,” she says.

The museum is but one of hundreds of attractions and excursions ready for Alaska’s 2013 tourist season.

“It looks like this will be the first time since 2009 that we’ll get back above the 1 million mark for cruise visitors coming to Alaska.”

He says the ships will bring nearly 70,000 more visitors north this season.

“The indications that we’ve gotten are that the prices are holding steady, which means that there’s less discounting and usually people who are a little more affluent are coming to Alaska. That should be good news for retail merchants as well as those who have shore excursions that hopefully people purchase when they get off the ship,” Binkley says.

“The industry is cautiously optimistic that it will be a great summer and total visitor season,” adds Sarah Leonard, president of the Alaska Travel Industry Association, a statewide tour-business group.

“Last summer we know that visitors reached 1.8 million in Alaska. And that was the first increase we saw in over four years. And then with some new … airline service and new cruise-ship berths, we see positive growth,” Leonard says.

Back at the Alaska State Museum, dozens of Kay Field Parker’s ravenstail weavings are on exhibit, in a summer show called “Playing with Lightning.” 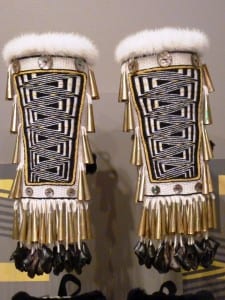 Leggings from the “Playing with Lightning” exhibit.

“Lightning is one of the patterns, a triangle pattern that repeats, but it reverses,” says Manning, the museum curator.

She describes ravenstail as highly geometric. The technique was rediscovered in the 1980s after being out of use for about two centuries. Manning says Parker’s work follows the old ways, with some variations.

“The traditional colors were white and black and yellow. And the majority of Kay’s work reflects those traditional colors. And based on materials, because they’re so hard to come by for weavers that do this kind of work, she also has some other colors she’s introduced,” she says.

This is the final summer exhibits will be on display in this aging museum. It will be torn down next year and eventually replaced with a modern structure including the state library and archives.

Meanwhile, the cruise-and-tourist season continues through late September. In addition to large-ship lines, the number of smaller tour vessels is increasing this year.