Dead eagle near Sitka made news in 1995 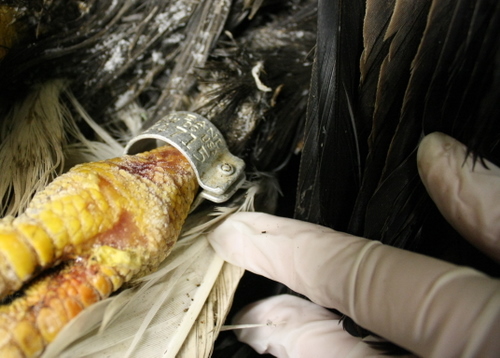 The metal band around this dead eagle’s leg helped identify him as “Windex,” so named in 1995 when he flew through a Sitka family’s plate glass window. Windex was found dead near a Sitka trail in mid-April. (KCAW photo by Ed Ronco)

In mid-April, a hiker in Sitka found an eagle dead in the woods. It was picked up by the Alaska Raptor Center. Ordinarily, this would not be a news story, except that this eagle was wearing some jewelry.

OK, so the jewelry the eagle was wearing was a metal band, which identifies the bird officially as 62934715. But back in 1995 he was known simply by the name “Windex.”

“Because he flew through a double-paned glass window,” said Jen Cedarleaf, who works at the Raptor Center. She’s flipping through Windex’s chart, which is dated July 1995. “We didn’t X-ray, we checked for fractures and lacerations. Didn’t have any fractures. We gave him fluids because he was in shock.”

Cedarleaf had just arrived in Sitka when the Windex incident happened.

“I pretty distinctly remember the call, because he flew through their window and knocked himself out, and they have this eagle in their living room, and they’re like, ‘What do I do?’” she said.

As it turns out, Lee Krause and his wife, Tina, still live in the house where it happened. During our interview, Lee sits in the same place he was 18 years ago when Windex dropped in for a visit — at the dining room table with his back to the window, not more than five feet away. 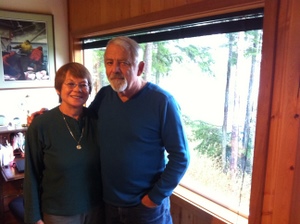 Tina and Lee Krause stand near the window where Windex made his surprise entrance in 1995. Lee was sitting with his back to the window, less than five feet away, when the eagle came crashing through. (KCAW photo by Ed Ronco)

“A total explosion, that’s what it was,” Tina Krause says.

“It was like a gun going off or something,” her husband adds. “And then I was just peppered up my back. I really thought somebody got me with a shotgun or something.”

Tina Krause says the glass flew clear to the other side of the house. When the eagle started coming to, they quickly put a throw rug on him, standing on the edges to keep the bird from causing more damage.

“And our grandson was sitting there watching TV, and he says ‘Holy cow! Grandma does this happen often?’ Because he’s from down below,” she said. “He was about 8.”

Raptor Center staff showed up, and with a makeshift stretcher, took the bird off for treatment. The Krause family cleaned up the glass and threw out the chunk of halibut Windex dropped when he made his entrance.

But that wasn’t the end of things for the Krause family. For starters, they made the front page of the Sitka Sentinel.

Krause reads the headline and the beginning of the story: “Eagle crashes party, sends guests flying. The Krauses aren’t used to uninvited guests showing up at their home for dinner, but at least this one brought his own entree…”

The newspaper article led to mentions in the press outside of Alaska, and they even became a tourist attraction.

“We ended up putting a great big piece of plywood over the window here, and the tour buses would all park down here, and tell the story about the eagle,” she said. “All the people would walk up our little driveway and stand there and take pictures of our house.”

Tina Krause and her husband have wondered what happened to Windex, and how he died. For the answer to that, we turn again to Jen Cedarleaf at the Alaska Raptor Center. 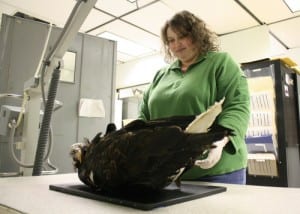 Jen Cedarleaf, of the Alaska Raptor Center, positions the carcass of “Windex,” a bald eagle found dead in April. Windex got his name in 1995 after flying through the plate glass window of a home on Halibut Point Road. (KCAW photo by Ed Ronco)

Flies are buzzing around Windex as she brings in the trash bag holding his carcass. It is the afternoon after Windex was found in the woods.

“He’s really stinky,” she said as she removed him from the bag. “He’s probably been dead a few days.”

Cedarleaf positions Windex on a table and we hide behind a lead screen as the bird is zapped by X-rays. When the film is developed, we see a small little fracture on one of the bones in his wing.

“I think his radius is broken,” she said, looking at the film. “I still don’t think that’s the cause of death, because he should have been skinnier. He should’ve lost a lot of weight from having the broken wing. But I don’t see anything else.” 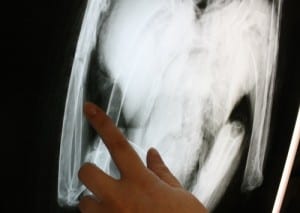 A small fracture is visible in one of Windex’s wing bones. The bald eagle, found dead in April, was a patient at the Alaska Raptor Center in 1995. (KCAW photo by Ed Ronco)

Windex was an adult eagle when he flew through the Krauses’ window. That was 18 years ago, which means Windex was probably between 20 and 25 years old when he died — about normal for an eagle in the wild.

Cedarleaf says the fact that this eagle was found, identified, and returned to the same clinic where he was treated nearly two decades ago is extremely unusual. As is his claim to fame. Lee and Tina Krause say they still tell the story of the day Windex came to visit.